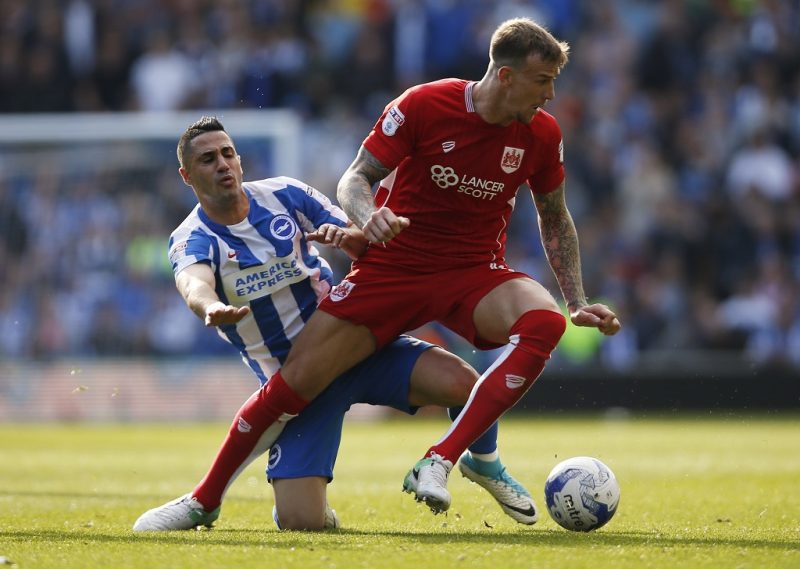 The Blues put together a combined bid of around £4 million for Flint and City’s 24-year-old academy product Joe Bryan earlier this month, but that offer was rejected by the Robins with manager Lee Johnson labelling it ‘derisory.’

Birmingham have since returned to Bristol City with a second bid for Flint, 28, but Johnson is standing firm and refusing to let the towering defender leave for less than he is worth to the club.

Speaking to Radio Bristol, the former Barnsley boss said: “Neither solo bid met our requirements or the figure we felt was acceptable.

“We’re in a strong position. We don’t want to lose quality players but, if we do, it would be at the right price.”

All summer, there has been speculation surrounding Flint, who arrived at Ashton Gate from Swindon in 2013, with Birmingham and Leeds circling, but it is the interest from Harry Redknapp’s side that has been the most intense.

Johnson cast doubt on Flint’s City future on Tuesday night, when he left the defender out of the the team that beat Plymouth 5-0 in the EFL Cup, but the boss has reassured fans not to read too much into the decision.

“He was unselected by me [against Argyle],” the 36-year-old manager said. “Aden knocked on the door. We had a good conversation. We’ve got a lot of respect for each other.

“After that conversation, which I won’t reveal because it’s private between player and coach, I felt it was better for the team to leave him out.

“The result and the team come first. It doesn’t mean that Aden’s going, or the door is closed on Aden at all.”

Redknapp has made no secret about his admiration of Flint, and his desire to make more signings and bolster the strength of his Blues squad – especially with the lack of depth at centre-back.

After John Terry joined arch-rivals Aston Villa, and with Ryan Shotton linked with a move away from St Andrews, defensive additions are needed and Redknapp said last week: ““I like him [Flint] but we’ll only pay what we can – if he’s too expensive then we’ll move on.”