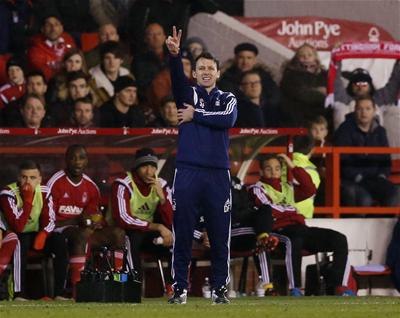 Dougie Freedman has signed a new two-year deal to stay at Nottingham Forest.

“I have signed the contract which he sent me, and I have sent it back. It’s done,” Freedman announced.

“I don’t see any hiccups. I’m delighted to be the manager of this club. I am so excited. It’s a fantastic opportunity.”

After a blistering start to life as Forest manager after replacing Stuart Pearce, where five wins from his first six matches saw them gain ground on play-off rivals, the former Crystal Palace and Southend striker has now seen his side go five matches without a win.

Nonetheless, the club rest in the safety of 10th place to the relief of the owner.

Al Hasawi had initially told Freedman at the start of his tenure that his position would be reviewed at the end of the season. But under the new contract, the 40 year-old can hope to be the first manager to spend over two years in the dug-out at the City Ground since Billy Davies (Jan 2009 – July 2011), something his seven predecessors have failed to achieve.

Freedman outlined his hopes for the future with the club due to conclude its seventh-consecutive season in the Championship.

“There are a couple of young players coming through and I will recruit a couple of new players.

“We need to add a bit of quality but we have Chris Cohen and Andy Reid coming back and hopefully Britt Assombalonga will bring us back his goals.

“I have to build something – it doesn’t just happen overnight. We have tried that trick and tried to throw money at it, and it has got us nowhere. Let’s settle everything down a little bit,” Freedman said.

“It is certainly a brighter future, but we need to plan it in a different way. It might not be back-page stuff, but we will slowly go about our business and try to be successful for the longer term.”