Home / Featured / Odion’s ticket to the Premier League with Watford

Odion’s ticket to the Premier League with Watford

Posted on February 20, 2015 by admin in Featured, Skybet Championship | 0 Comments 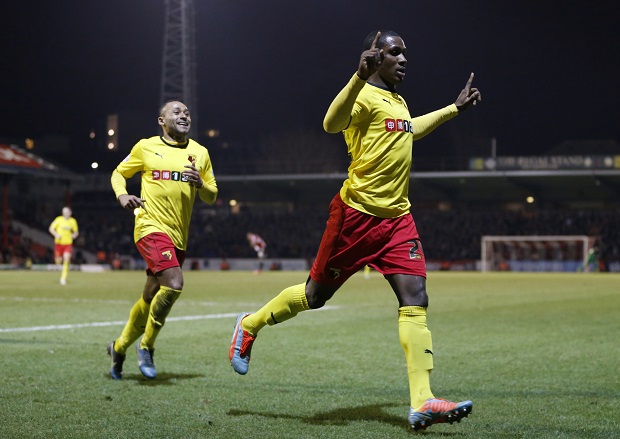 HIS first name is similar to a well-known cinema chain – and Odion Ighalo wants to be big box office in the Premier League with Watford.

The Nigerian striker is the most in-form forward in the country right now – with 12 goals in his last eight league games –and he revealed West Bromwich Albion made a move for him late in the January transfer window.

The 25-year-old confesses he doesn’t know if his long-term future lies at Vicarage Road but there is music to Watford fans’ ears: he believe they will win promotion.

His injury-time winner buried Brentford on Tuesday night and with 11 Championship goals already in 2015, the former Udinese man reckons he is now getting used to life in England.

He told The FLP: “I’m happy because I am in a good moment probably the best moment that I have ever had.

“I have not been in form such as this in my career to date, but I feel like this is only the beginning. I have a lot more in me and that’s a good feeling.

“I have to keep on working, when I was not scoring I had the same attitude. Just because you are getting goals to your name now it doesn’t mean you stop.

“I want to keep my head high, it’s a good record but I don’t mind not scoring as long as things are good for the team.

“I have played in Norway, in Italy and in Spain but being in England and in the Championship is such a different game – you have to run from the first minute to the 90th and it’s so hard. It was difficult for me to adapt in the beginning but now I am finding my feet and growing into it. It’s exciting.”

With such impressive form, it’s a good job for the Hornets that the transfer window has slammed shut. Tony Pulis wanted the forward at West Brom and, with Hull City also linked, he could be in the top flight next season with or without Watford. But Ighalo feels promotion is more than a possibility.

He added: “I have a contract here until 2017, and I am a Watford player for now. I don’t know what will happen after that. During the transfer window some Premier League clubs came in for me, West Brom was one. It is my dream to play in the Premier League but I do know that my heart is with Watford now and we will gain promotion.

“I think we will, but we must work hard and continue to fight together. We have a good team, one good enough to go up, but we can’t relax.”