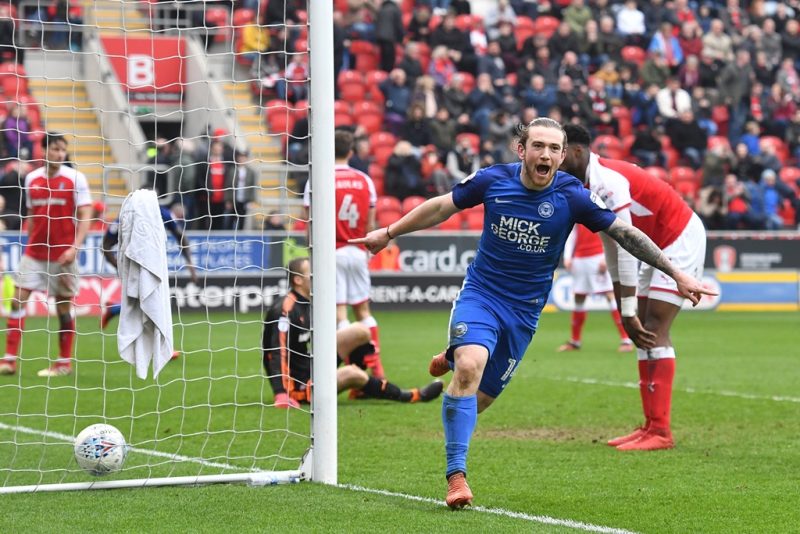 FORGET the player of the season. Forget the team of the year. Here at The FLP, we have some awards of our own to hand out.

From a team of golden oldies to signings who failed to fire, here are the gongs that were scandalously overlooked at the end of season shindig…

EVEN at a record-breaking £15m, Ruben Neves’ move to Wolves looks a snip. After a majestic season, the Portuguese maestro must be worth twice that now – if not more.

An honourable mention, too, to Marc McNulty. Unwanted by Sheffield United, the striker joined League Two Coventry on a free transfer and has either scored or assisted 29 of their 64 goals.

But when it comes to savvy business, Peterborough are rarely outfoxed – and so it has proved with Jack Marriott.

Fourth-choice at Luton, Posh saw untapped potential and paid the Hatters £500,000 for the striker.

Now, after a sensational 27-goal season, the 25-year-old is a reported £7m target for clubs both at home and abroad. “Mark my words,” said Posh boss Steve Evans, “this kid is going to the very top.” And at a potential 1,300 per cent profit, too.

“I know Neil is an excellent manager but I didn’t actually realise he’s also a qualified health and safety inspector” – The Derby boss after heavy snowfall saw the Rams postpone their home fixture with Cardiff in March. Bluebirds boss Neil Warnock had called the decision “disgraceful”.

MIDDLESBROUGH’S misfiring winger is far from the only big money flop this season. Fulham’s misguided decision to leave transfers in the hands of data analyst Craig Kline saw £8m blown on Rui Fonte, a Portuguese striker who scored three goals, shuffled out wide and at one stage ended up playing left-back.

But in terms of meeting expectations, nobody fell shorter than Braithwaite. “He has intelligence, he’s quick and dynamic,” said boss Garry Monk, after Boro had shelled out £9m to sign the 26-year-old from Toulouse. “Hopefully we’ll see some goals and assists.”

Monk’s optimism was well founded. Braithwaite was electric in Ligue 1 last season, beating defenders for fun. In the Championship he couldn’t beat an egg.

After two goals in his first four games, Braithwaite toiled and when Tony Pulis replaced Monk in December, the Dane was packed off on loan to Bordeaux.

Not for the 25 goals that fired Accrington to the League Two title but for opening up about his mental health.

Kee, who was diagnosed with bipolar disorder after several bouts of crippling depression, gave a series of moving interviews about the “rat” in his head.

Society – and sport – still struggles with the concept that someone can be wealthy and successful yet still suffer from depression. Too many still believe it is simply a matter of looking on the bright side. If Kee’s candour can educate just one person, he has done all sufferers a service.

“You have to wonder what these folk would do with their life if it wasn’t for my errors of judgement” – Accrington chairman Andy Holt, left, who was reprimanded by the EFL for buying his players a McDonald’s after every victory. The authorities insisted that burgers should be offered win or lose. 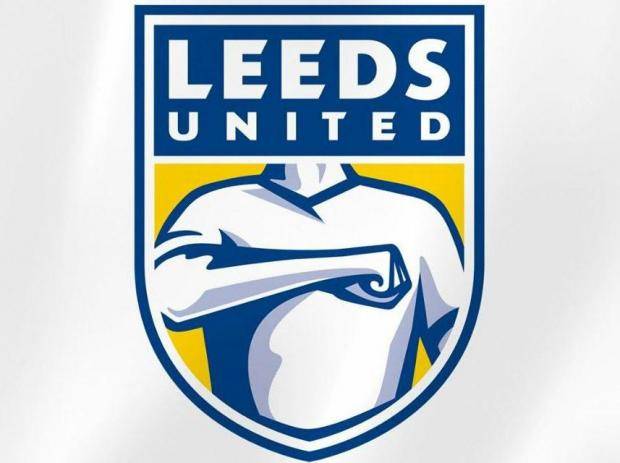 Gaffe of the Year – Leeds United

Six months of research. 10,000 people consulted. Ready for the next 100 years… Yes, it can only be that laughably awful badge.

Leeds must have known they’d dropped a clanger when their new crest, below, went viral within minutes of its release.

Many likened it to a badge from Pro Evolution Soccer, with Aston Villa hilariously advertising their upcoming clash as West Midlands Village v Yorkshire Whites.

And if taking stick from rivals wasn’t bad enough, even Leeds’ own players stuck the boot in, with skipper Pontus Jansson describing his “shock” and Ian Harte – who actually appears in the promotional video – admitting he wasn’t a big fan.

Leeds immediately scuttled the whole shebang, but never did reveal who the hell those 10,000 people were.

Wycombe manager Gareth Ainsworth played for 22 years and is still on the club’s books at the grand old age of 45.

So if anyone knows that age is no barrier, it’s the old rocker known as Wild Thing. Front three Craig Mackail-Smith, Bayo Akinfenwa and Nathan Tyson have a combined age of 105. In midfield, Sam Saunders, Marcus Bean and Matt Bloomfield clock in at just three years less.

Unsurprisingly, Ainsworth’s Space Cowboys are regularly the oldest team in the EFL, with the starting XI for last month’s match at Lincoln boasting an average age of 32 – the highest in English football for ten years.

But did they run out of steam? Not if promotion to League One is anything to go by. As the old adage should say, ‘if you’re good enough, you’re young enough’.

“We got some San Miguel in for Pep. Unfortunately, he never came up so it’s still there in the fridge!” – Wigan boss Paul Cook on why visiting managers to the DW would be getting a bottle of Spanish lager. The pair had a bust-up in the tunnel at half time during Wigan’s shock 1-0 victory over Man City in the FA Cup. 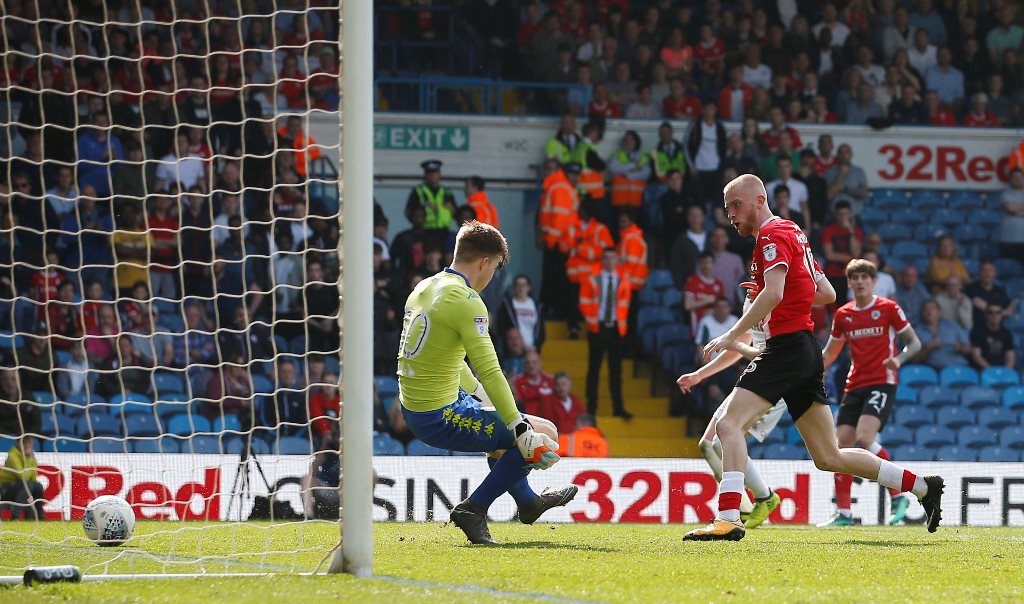 Prized guy: Oli McBurnie has attracted attention from Leeds United after starring for the Tykes (photo: Action Images via Reuters)

Barnsley were relegated on the final day of the Championship season, but the Tykes wouldn’t even have got that far without their livewire loanee.

The 21-year-old Scot played just 17 games after arriving from Swansea in January but that was long enough to score nine goals, finish the season as joint-top scorer and even win the club’s Player of the Year award! Not sure what the rest of the squad made of that…

Kudos, too, for Aleksandar Mitrovic. Untrusted by Rafa Benitez at Newcastle, the big Serb joined Fulham to get match-fit for the World Cup and very nearly powered the Cottagers to promotion.

Over the course of 13 years and 20 clubs, Clarke has rarely been a manager’s dream. As a kid at Wolves, he abused his own fans. At Sheffield Wednesday he broke a toe – by kicking the hoardings to celebrate a goal.

Most famously, he got into a punch-up with Paolo Di Canio at Swindon, sat on the pitch in protest, then left the ground dressed in full kit.

And as for prolific… well, the striker’s best Championship season came nine years ago when he scored eight times for the Owls.

Yet, out of nowhere, this grouchy lower-league journeyman became a dead-eyed predator, netting 19 times for Sheffield United and coming within two goals of the golden boot.

“Some players just get better as they get older,” said Chris Wilder. At this rate, Clarke will be up for the Ballon d’Or by 35.

“Overall, my chairmanship has not gone the way I would have wished” – Ellis Short, left, gives himself a generous appraisal after ten years, two relegations and a £100m debt write-off at Sunderland.

Between a 0-0 draw with Oxford on December 13 and a 2-1 defeat to the same opponents on the penultimate weekend, Rochdale spent just 72 hours outside the League One relegation zone.

In fact, they were still there with 21 minutes of the season to play. Then, when all seemed lost, local lad Joe Thompson – back in action after beating cancer for the second time – came off the bench to seal survival with the winner against Charlton.

“I said from the start that survival would be a long-term project,” said gaffer Hill, left. You can say that again.

He’s back! After Forest fans had serenaded his s*** trainers during the East Midlands derby: “All I would say about the trainer shout is, look, when this level of fashion hits Nottingham in about six months, you’ll probably see 25,000 people walking around Nottingham with these type of trainers on.

“Until someone opens a door to this type of style then unfortunately you’ll have to make do with wellies.”