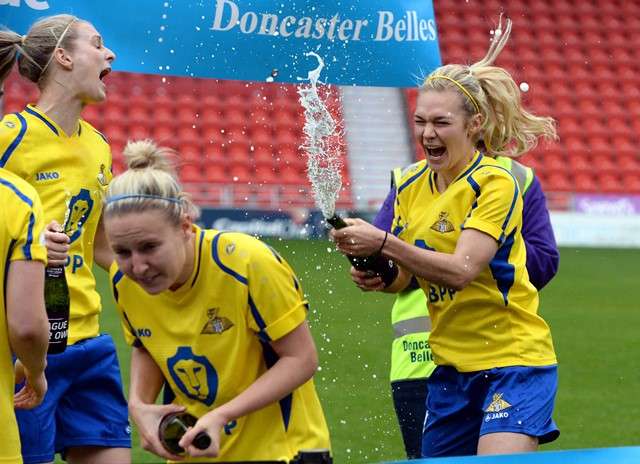 Simpkins, who originally played for Doncaster in 2009-10, has appeared in the Champions League for Birmingham and won the Women’s Premier Division title with Nottingham Forest.

She has always combined playing with her work as an FA skills coach, mentoring five to 11-year-olds in Staffordshire – a stone’s throw from St George’s Park.

She failed to set the world alight at Birmingham, starting just 11 games in four seasons, but gained a new lease of life last term with Doncaster where she helped the Belles achieve promotion to WSL 1.

Now, the club have given her a big vote of confidence by rewarding her with a full-time contract.

The fact that it’s the first deal of its kind to be offered by Doncaster is a landmark moment for the club. For the player, though, it’s no exaggeration to say it is life-changing.

“This feels like the start for me,” said Simpkins, who also counts Coventry and Leicester among her former clubs.

“It feels very serious now. I had so many setbacks at Birmingham. I was virtually bench-bound, but this has come around because I stuck at it.

“Things weren’t going great at Birmingham and I needed a change of scene.

“There was an opportunity to come back to Doncaster and get my confidence back up. Getting promoted has been a huge bonus and now there’s no looking back for us.

“It’s a real honour to sign the first full-time contract, especially having already been here. The club has a big place in my heart.

“Being a full-time player has not really sunk in yet. I can’t wait to get the ball rolling when training begins in January.  I’ve always trained around my full-time job and now I’m getting paid to be a footballer.”

Simpkins is the first of ten players due to be rewarded with full-time deals, though she is opting to err on the side of caution, spending her winter completing a personal training course as something ‘to fall back on’.

Since promotion from WSL 2 was secured, Doncaster have also revealed plans to build a new training complex – the first dedicated elite women’s training centre in the country.

Manager Glen Harris has reaffirmed his intention to stay on at the Keepmoat Stadium and the next task on the agenda for Doncaster is to prove themselves on the pitch in WSL 1.

They claimed the scalps of Liverpool and eventual champions Chelsea along the way.

And Simpkins has no doubt Doncaster are capable of doing the same.

“The club are putting in the foundations to build from,” she said. “There is great ambition here, no backwards steps. The training ground, especially, is a huge development.

“This season we’ve got quality individuals like Sue Smith, who can drive us through.

“And, just like Sunderland last year, we are not here to make up the numbers. We feel we can be competitive.”

*This article was originally published in The FLP on 29 November.