Jordan: We owed fans that victory 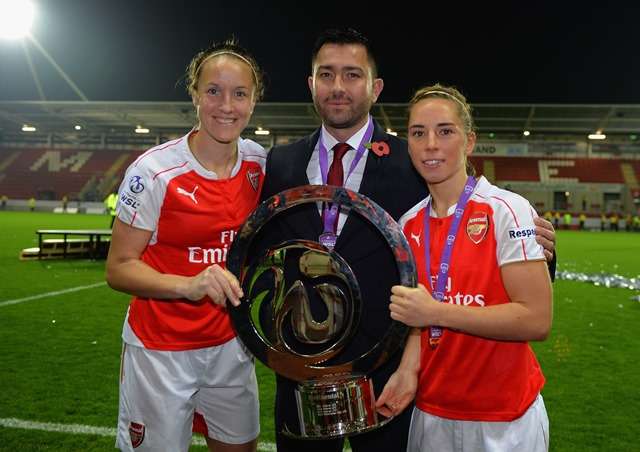 Two-goal hero Jordan Nobbs believes Arsenal had a point to prove in the Continental Cup final after a disappointing WSL1 season.

The Gunners finished third but missed out on a Champions League spot to champions Chelsea and runners-up Manchester City. But they finished the campaign in style by running out comfortable 3-0 winners against FA Cup finalists Notts County in last Sunday’s Cup final.

Two first-half goals from Nobbs and a stoppage-time finish from Chioma Ubogagu ensured they lifted the trophy.

The 22-year-old midfielder told Women’s Football Weekly: “For a club like Arsenal, which prides itself on winning trophies, it was really important to go out  and perform. Finishing third was a disappointment and we wanted to show  we still had what it takes to be at the top.”

Nobbs scored early to put the Gunners in the ascendency and her second – a 25 yard screamer – was one to remember.

“I am known for my long strikes”, Nobbs said. “So, when I had the ball in that area, it was second nature for me to hit it.

“I was very pleased to get the two goals and especially to make our mark so early in the game. It is hard to pick my best moment because I have already had a few in my career.

“In terms of the goal and winning the trophy, it is definitely up there, but scoring my first senior goal for England on my debut is one that will always stay with me – that was a great moment.”

Nobbs’ England teammate, Laura Bassett, of County, was sent off midway through the first half after a sliding challenge.

“We can’t judge what happened to Bass – we just had to get on with it. Notts did, too, and, though it gave us that extra incentive, I still think we would have won.

“We had already scored the first goal and we were playing really good football.

“We won the physical battle and showed how well we pass tfrom back to front. Our build-up play for the first goal was what we are all about and we really looked dangerous from that right-hand side.”

A proud Nobbs said: “We are Arsenal and we always show up for the big games. We showed we have talent and there is no reason why we can’t be back fighting for a Champions League spot next season.

“For me personally, I want to be winning silverware and I want to show the fans who support us what we can do. Sunday showed exactly how far women’s football has come.

“To have 5,000 people coming to watch us in Rotherham – which is not close for either side – is amazing and the atmosphere was great.”

Missing out on a Champions League spot was a bitter blow for the women’s game’s most successful team, but Nobbs says the only way is up.

“Chelsea had an unbelievable strike force this year and they were just too strong,”she added. “We were unlucky with a few injuries. I was out for a good few games in the middle of the season, so it was tough.,

“I am dying to get back playing with England.

“I haven’t been with the girls for a while and I want to be back with that team.

“We had a day off after the Cup win and all the girls deserved it. Now, we are back in training and getting ready for the internationals.”