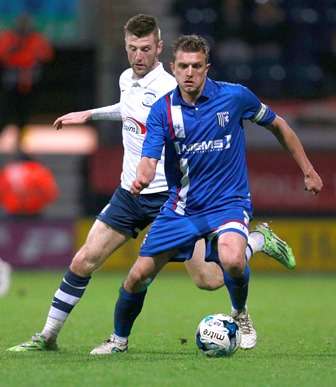 That was Manchester United v Wimbledon. It was when Wimbledon were still in the Premier League back in 1996. It was the first game of the season, Man United won 3-0 and David Beckham scored that incredible goal from the halfway line, which was amazing to watch.

David Beckham. When I was young he was just coming onto the scene and through the ranks. I followed him through his career as I liked him from a young age. He just continued to progress and I think he was one of the best players to watch – definitely my first football hero.

I think I got a pair of Patrick’s as my first boots, but they were not my favourite pair. My favourites were the first Adidas Predators. They were great boots. I was quite young – maybe about seven or eight – and when I put them on for the first time I thought they were amazing.

That was actually a Liverpool one. The sponsor on the front was Candy – that is how long ago it was! They had that from 1988-1991 back when Kenny Dalgish was manager. I am not even a Liverpool fan so I cannot even tell you why I had that as a first kit. It must have been in a sale or something!

It was towards the end of the 2005-06 season for Brighton & Hove Albion. It was at home to Preston North End and my favourite memory from the game was just coming onto the pitch. I think I only played for about five minutes, as I came on as a substitute, and we drew the game 0-0 but it was an amazing feeling to be playing for them.

My first goal came in the same season – I only played a handful of games but I did get a goal against Stoke City. We lost 5-1 and I scored the only goal for our side. I remember it well, as I managed to knock the ball over Michael Duberry’s head and volleyed it into the corner. It was a great first goal to score.

That was when I played at Port Vale. We were playing against Bradford and I was sent off for a nasty tackle on Ricky Ravenhill. It was in the last minute of the game, or maybe even in injury time. It was quite frustrating to be sent off in the last minute as I had played the whole 90. We drew 0-0 so luckily enough it didn’t change the outcome of the match, otherwise that would have made the sending off slightly worse.