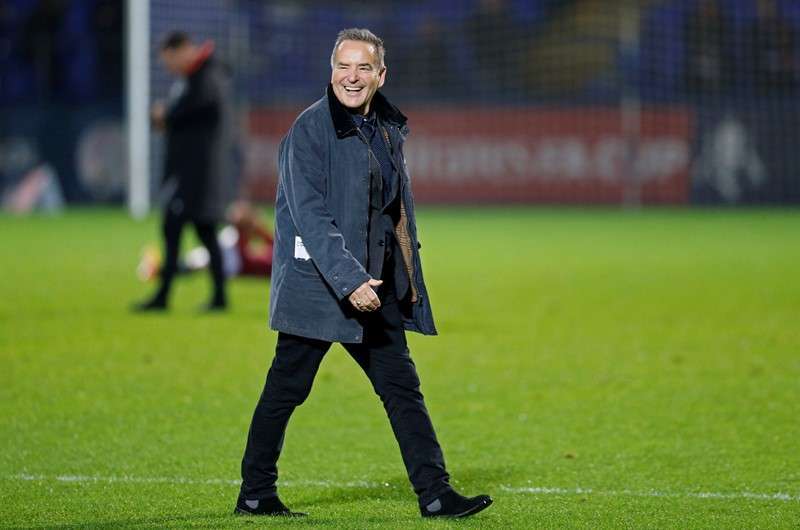 WHEN Hartlepool United take on Derby County in the FA Cup next Saturday, they’ll be followed, anxiously, by thousands of armchair fans, most of whom could no more pinpoint the town on a map than they could find Timbuktu.

The programme is unmissable if you’re in front of a TV on Saturday afternoons and Stelling, as the acclaimed host, combines a deep knowledge of facts and figures with zeal and humour as the goals come in from around the country.

But when it comes to Hartlepool, his home-town team, he’s about as impartial as Donald Trump on the campaign trail.

A score in a Pools match – for or, more usually, against – evokes a Stelling reaction worthy of any fan on the terraces. It’s infectious, the audience are living it with him and people from across Britain have voiced their support.

“I met a little old lady in a service station,” says Jeff, “and she told me her second team is Hartlepool now. We seem to have created an army. People write, I’ve been sent team shirts… even a signed football from someone in Devon.”

At this point, if you’re not familiar with the Stelling antics, I recommend YouTube to see him implore a referee to blow for time in a crucial game, or disconnect his microphone in excitement at a Hartlepool goal, or, best of all, the James Brown saga (Hartlepool had a striker of that name and when he scored Stelling produced a doll of James Brown, the soul singer, and celebrated to the tune of ‘I Feel Good.’)

So is this for real, or is it spiced with a pinch of showbusiness?

Jeff provides hard evidence: “The League One play-off final against Sheffield Wednesday in May 2005. Hartlepool were 2-1 up, seven minutes away from the Championship.

“Then Chris Westwood gave away a penalty and was sent off. It was never a sending-off, the ball was in the keeper’s hands.

“That was 2-2 and you could see what was going to happen… Wednesday had five strikers on the pitch and won 4-2 in extra-time. To make it worse, we’d beaten them 3-0 a couple of weeks before.

“They say you’re supposed to enjoy the big day, come-what-may. Well, I didn’t. Instead of having a night out in Cardiff, I went straight back to the hotel, drew the curtains and went to bed at 6pm. Four hours later I got up and drove home.”

Stelling has been with Hartlepool through thin and thin, since he first went to Victoria Park as a young boy, accompanied by his older sister.

“I used to sit on the wall around the pitch, dangling my legs about two feet away from my heroes. In those days there was no segregation, so you could watch at the Town End in the first half, then walk to the Rink End for the second. You’d swap with opposing fans… there was rivalry, but no trouble. We couldn’t afford to go every week, but they used to open the doors about 15 minutes from the end to let people out, so we’d go in then. We’d usually be two or three down.”

Hartlepool or Hartlepools United, depending on the era, habitually finished in the basement of the Football League, a threadbare club in a town whose proud working-man’s history in shipbuilding and steel was in depressing post-war decline. So why did the young Jeff Stelling endure the pain?

“You either went to Victoria Park or you didn’t go to football. We didn’t have a car and public transport was poor, so we couldn’t get to Middlesbrough or Sunderland.

“We could walk to the match and back again – and you might just catch the football results when you were home and sat in front of the fire.”

As all true fans know, Jeff had caught the bug, with all the emotions that entails, so he is quick to emphasise Hartlepool’s more successful spells in League One, and that Brian Clough and Peter Taylor started their management partnership there, “changing the mentality of the place”.

On their way: Scott Fenwick breaks the deadlock in extra-time in Pools’ 2-0 second round replay win over Salford City (photo by Action Images / John Clifton)

And, very occasionally, the dark clouds of doom disperse, spilling a shaft of light on those toilers of the lower leagues.

Hartlepool’s most recent joy came last season, when a run of success under Ronnie Moore saved them from impending relegation to the National League. They were a whopping ten points adrift at the bottom and written off, yet secured safety with a game to spare.

“That win, 2-1 over Exeter, was probably our greatest day, because if you do go down it’s very hard to get back,” says Jeff, succinctly capturing what supporting the likes of Hartlepool is all about.

Since October, Jeff has been the proud honorary president of Hartlepool United, although work commitments mean he doesn’t see them play often enough.

However, he did watch the FA Cup replay against Salford City and confesses they were fortunate to win through.

“We let Salford punch themselves out,” he said. “They could barely stand at the end, let alone run. It was one of the worst 90 minutes you could see, but we beat them in extra-time.”

So what of Championship heavyweights Derby County in next week’s third round?

“I want very little to report all afternoon,” says Jeff. “I really hope we don’t get a belting, because our home form is poor and confidence is already low. It would be a massive bonus going forward if we could get something.”

His legion of part-time Pools fans will doubtless agree, but if his brave prediction of a 1-1 draw comes true, it would be a genuine Cup shock. In fact, and with apologies to Soccer Saturday and pundit Chris Kamara, it would be “Unbelievable Jeff”.