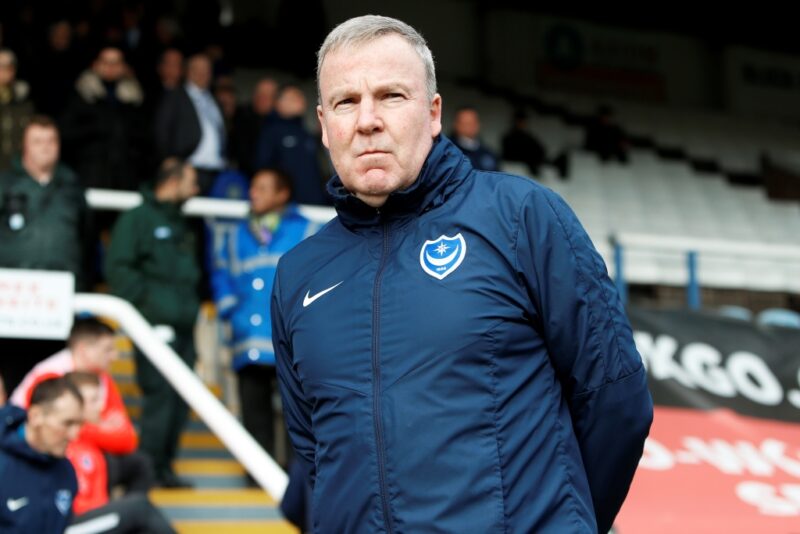 POSITIVE Portsmouth boss Kenny Jackett believes it can be a case of third time lucky as they seek promotion back to the Championship.

The last two League One campaigns have seen Pompey bundled out in the play-off semi-finals, going down against Sunderland and, most recently, Oxford, the latter on penalties in July.

But having felt he only needed to make minor changes to his squad which has started the new campaign with victories in both the Carabao Cup and the EFL Trophy, Jackett is aiming for a celebration party next April. If you’re plotting on Portsmouth entering the promotion race check out this Bet365 promo code for EFL markets.

“There is a lot of ambition and determination running right the way through the club to do exactly that,” said Jackett after the 2-0 midweek EFL Trophy victory against Colchester.

“We’ve been very close in the past and so want to do everything we can this season to go one better and get promoted to the Championship.

“A number of our squad have developed after we had quite a high turnover of players last summer. We haven’t changed too many this summer, with one permanent signing in Callum Johnson and one loan arrival in Cameron Pring (from Bristol City).

“I have got a lot of trust in the squad that we have and believe they can keep improving. There are always one or two areas that you’re looking at, but I don’t think we’re too far off where we need to be.

“With the long season we’ve got ahead, it’s important to make sure we’ve got all bases covered.

“It’s going to be a very intense season, with a lot of games in a short space of time, so it’s important to have competition in all positions.”

Johnson and Pring were both impressive against the U’s, defending tightly and swiftly employing overlaps to strengthen attacks.

Jackett does admit that he would still like to add strength to his squad before the transfer window shuts next month and, despite spending around £200,000 on right-back Johnson, 23, from Accrington Stanley, has been told by the Fratton Park board that more cash is available.

However, he does not see getting more players to sign as a matter of urgency.

“If something does develop I would not hesitate to pull the trigger on it,” he said.

And asked whether there were gaps in his squad, he added: “There are one or two and we’re always looking for players who can either improve or complement what we already have.

“There are a still few weeks left until the transfer window closes, so we’ll have to see what happens between now and then.”

But one gap looks to have been filled by winger Marcus Harness, who netted nine goals last term following his switch from Burton.

Harness scored both the goals in the EFL Trophy opener against Colchester, netting with two shots from the edge of the penalty area in the space of just 90 seconds.

Harness, 24, said: “I’ve finally found the confidence to relax and do what I can. It’s working at the minute so I’ll try to build on it and hopefully can chip in a lot this season.”

There is, however, one aspect behind the weeks coming up that Jackett can do nothing about – and that is Portsmouth, and all clubs, being forced by Covid to play their games behind closed doors.

It’s a blow for Pompey, whose noisy fans can so often put the wind up the opposition.

Jackett added: “We were unbeaten at home last season before it was suspended because of the pandemic and have to adapt quickly to playing behind closed doors or with a reduced capacity.

“It’s the same for everyone, though. Everyone relies on the backing of their fans and we’re all looking forward to the day when they can come back into the ground.”