Home / Features / Columnists / Dunlavy column: JET is running out of runway to get lift-off

Dunlavy column: JET is running out of runway to get lift-off

Posted on February 11, 2016 by Adam Ellis in Columnists, Features | 0 Comments 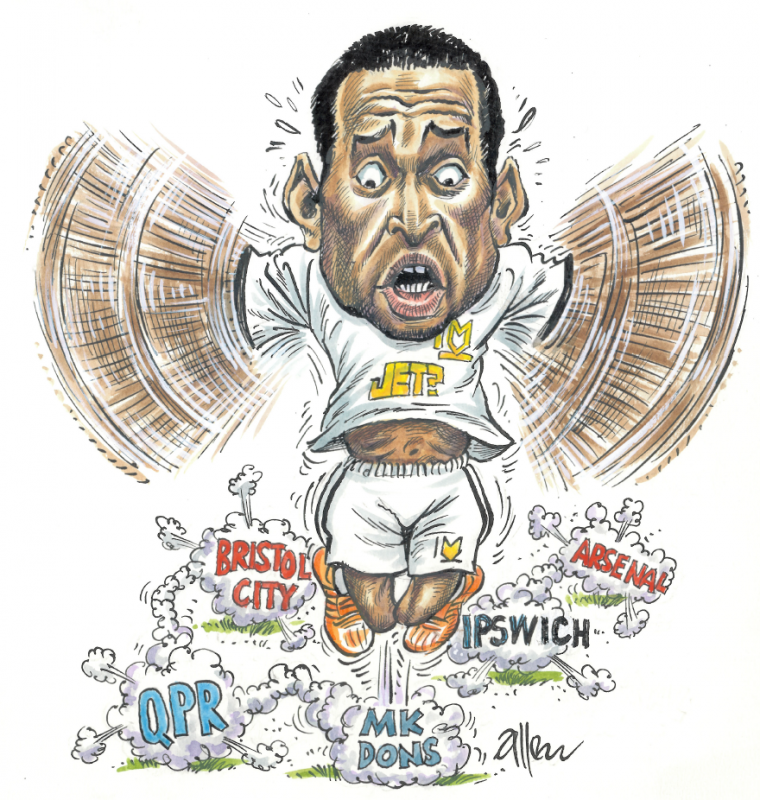 LANGUID. Laid back. Lethargic. Has any player ever had a less appropriate nickname than Jay Emmanuel Thomas? The striker, who calls himself JET, is more like the Spruce Goose, Howard Hughes’ gargantuan sea plane that flew for 50 lumbering seconds and never took off again. Flash, yes. Effective, no.

Few players in the Championship can boast such extravagant skill as the man who joined MK Dons on deadline day.

Whether it’s bundling a defender aside, leaving him on his backside or belting home from 30 yards, nobody can match his combination of flawless technique and physical power.

“Jay has outstanding qualities, and the build you dream to have,” said Arsene Wenger in 2010, shortly before handing the 19-year-old his Arsenal debut.

“And he is an unbelievable finisher. Right foot, left foot, inside or outside of the box. That is a massive talent you cannot teach. It is down to how far he wants to go because he has big potential.”

Yet, if the Frenchman’s praise was heartfelt, his final point would prove most salient. The striker has simply never shown the application to match his aptitude.

One game in ten, Emmanuel-Thomas will explode in a firestorm of brilliance, embarrassing defenders and scoring for fun.

His ‘Hocus Pocus’ trick, to beat two Everton defenders, has clocked almost two million views on YouTube. So, too, his comically slow penalty routine. But the rest of the time? Nothing. No hold-up play. No tracking. No working the centre-halves. Like a lower-grade Dimitar Berbatov, he is either inspired or invisible.

Wenger was the first to down tools, shipping him off to Ipswich for £1.5m in 2011. Mick McCarthy persisted gamely, but eventually decided his budget couldn’t accommodate a luxury player. “Halle Berry excites me,” he said in response to a journalist’s criticism. “But I wouldn’t want her in my team.”

Bristol City appeared to mark a turning point, with 33 goals in 103 games and promotion to the Championship. Yet, with a relegation battle looming, gaffer Steve Cotterill had no intention of renewing his contract – a decision vindicated by JET’s subsequent anonymity at QPR.

So, can the Dons realistically expect anything more than a part-time showpony? Mentally, at least, he isn’t likely to change.

“I am not fazed about what people think of me,” he said in an interview last year. “I wear what I want, I do what I want, I say what I want. If you can’t be yourself at all times, then you are never going to know who you really are.”

Fair enough, but Emmanuel-Thomas would certainly do well to watch the man who joined him at Stadium:MK on deadline day.

Alex Revell is the polar opposite of JET, a man who has had to fight and graft his whole career to make up for the limitations nature imposed. If his new-team-mate had an ounce of that attitude, he’d still be plying his trade at the Emirates, not scratching around at the foot of the Championship.

Yet, in the player’s defence, his type was never a perfect fit for blood-and-thunder managers like Cotterill and McCarthy. Nor was his frequent reduction to impact-sub status much use for a guy whose size necessitates non-stop football.

If Karl Robinson, who nurtured both Benik Afobe and Patrick Bamford into goalscoring superstars, is willing to indulge the odd no-show, he could be rewarded.

Truthfully, though, that is up to JET. With a fashion range and growing reputation on the London music scene, perhaps he is happy playing football as a well-paid hobby.

If not, he’d better get his backside into gear. Because, at 25, another failure to launch could see JET consigned, just like Hughes’ hubristic Hercules, to the backwaters of history.

*This article was originally published in The FLP on 7 February.