Flinders – Mo can reach the top 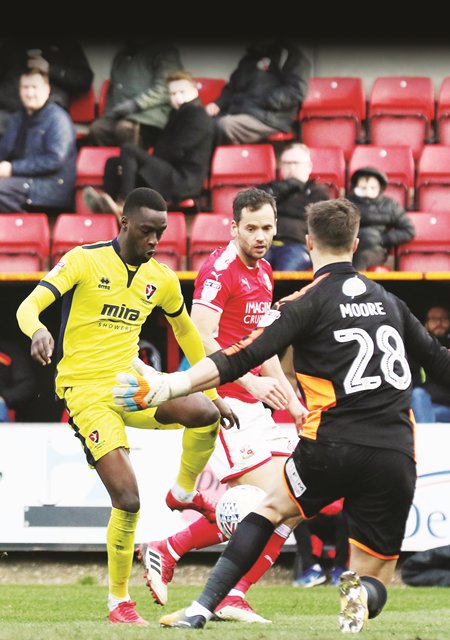 With his first season in the Football League not yet complete, the humble 23-year-old has already passed the 20-goal landmark for Cheltenham.

No-one has scored more in a single league campaign for the Robins.

Someone who comes up against Eisa every day in training, goalkeeper Scott Flinders, believes the Robins hitman is destined for the very top.

The 31-year-old said: “There are games we have won this season that are just down to his brilliance. Even when he doesn’t score, his work-rate is exceptional.

“He’s just as special in training. Some of the things that go in, you’re just left scratching your head about how he did it.

“I’ve been at a few clubs now, seen some top players in my time, and he is a natural-born finisher. He’s just got it.

“He could play at the highest level. He gets better and better in every training session, in every game.

“He could definitely go and play in the Premier League because he’s just got that knack, a natural ability to score goals. Give him a chance and he’ll score. It doesn’t matter where it is or who it’s against.

“He was playing for Greenwich Borough last year in the eighth tier. He’s shot straight up to League Two and he doesn’t look out of place.

“What’s going to stand him in good stead is his attitude. It’s first-class. Sometimes, you get young lads who, as soon as they’re at a club, think they have made it.

“He’s not one of those, he always wants more.”

To get his chance at Whaddon Road, Eisa, whose younger brother Abo plays for Shrewsbury, has had to graft.

Shortly after arriving on these shores from Sudan, he enrolled at the Pro Touch Soccer Academy in north London.

He had trials at several clubs, including Norwich, between the ages of 12-16 but no one took a chance on him.
Eisa played at semi-professional level for Dartford, VCD Athletic and Greenwich Borough – where he hit 57 goals in two seasons – before Cheltenham rolled the dice.

Offering him a one-year contract last July, boss Gary Johnson said at the time: “He probably isn’t one to go straight into the first team.”

But Pro Touch Soccer Academy co-founder Ash Rahmann, who also has Eisa’s brother Omar on his books, felt he was always destined to make it.

Rahmann recalls: “He had several trials and had the potential to be given a chance at a professional club’s academy.“He was worth a gamble, but whenever he went for a trial people would say they had similar players to Mo.

“It was disappointing for him, but Mo never accepted ‘no’ as an answer.

“He continued to push himself to where he has got to today, so he has to take credit for being strong enough to get there.

“I have had boys play for the England age group teams, in an academy with the world at their feet, and they’ve gone off the rails and lost their careers. Mo was never that kind of kid.

“I’m still in touch with him. I bumped into him last year during Ramadan outside Finsbury Park mosque and he told me he was still having trials but had not got anywhere.

“I told him to hang on in there and, sure enough, Cheltenham gave him his chance.

“He is strong-minded. I never doubted him.”