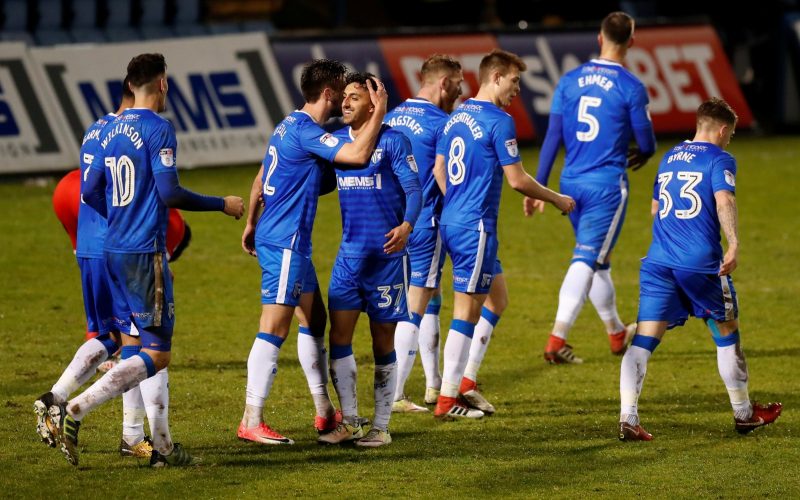 After impressing boss Steve Lovell while on trial, he joined the Gills in January until the end of the season and now has his sights on finding a long-term home in Kent.

Just before Easter, Nasseri was handed his full debut, scoring a header in a 2-1 defeat to MK Dons.

His appearances for the Gills marked the latest chapter in a globetrotting saga that has seen Nasseri join from Swedish club Syrianska following spells with Macclesfield and Birmingham, and youth stints at Bury, Blackburn and, initially, Manchester United.

“I had a dream starting debut against MK Dons, apart from the result,” said the former United trainee.

“It was great to get in and it was a decent performance. I got my goal and it was just a shame we didn’t get the result.

“My first target is to cement a place in the team and get a contract sorted out at Gillingham, then stamp my authority on the league and show the ability I have.”

The Manchester-born midfielder clearly enjoyed his time playing in the city of Södertälje, but a move to Sweden’s second tier was far from what he had originally intended.

“When I was going over to Sweden, I was going to AIK, one of the biggest teams in the country,” said Nasseri.

“I went over there, played a game for the first team and I was supposed to sign a deal.

“At the last minute, the deal fell through because the sporting director and the manager had a debate about which midfielder to bring in.

“They ended up signing Kristoffer Olsson, who is Sweden’s U21 captain. He was playing for Midtjylland in the Europa League, so I lost out!

“But I played for a season at Syrianska, got 30 games under my belt and it was great experience.”

As well as broadening his footballing experience playing in Sweden, Nasseri has also represented Iran at Under-21 level.

His parents both hail from the Middle Eastern country and his call-up for the team stems from sharing a club past with the current manager of the Iran national side, Carlos Queiroz.

“Carlos worked here in England before that (Queiroz had two spells as Manchester United assistant manager, sandwiching a season in charge of Real Madrid).

“He’d heard about me playing in England and he’d been at United, so he put me in touch with his assistant manager.

“They invited me over a few years ago to train with them and, now I’m getting older, I’ve got to get the full international call-up. The aim is to push on for that.

“I didn’t work with Carlos at United because he was with the first team. As an academy lad, you don’t really get that opportunity, but we’ve spoken on the phone a few times and, when I was in Iran, we’d speak every day.

“It’s absolutely crazy over there. When the national team play in Tehran, they have 100,000 people at the stadium. It’s packed out and it’s absolutely bonkers.”