Allen will be “the happiest person ever” if Bees stay up 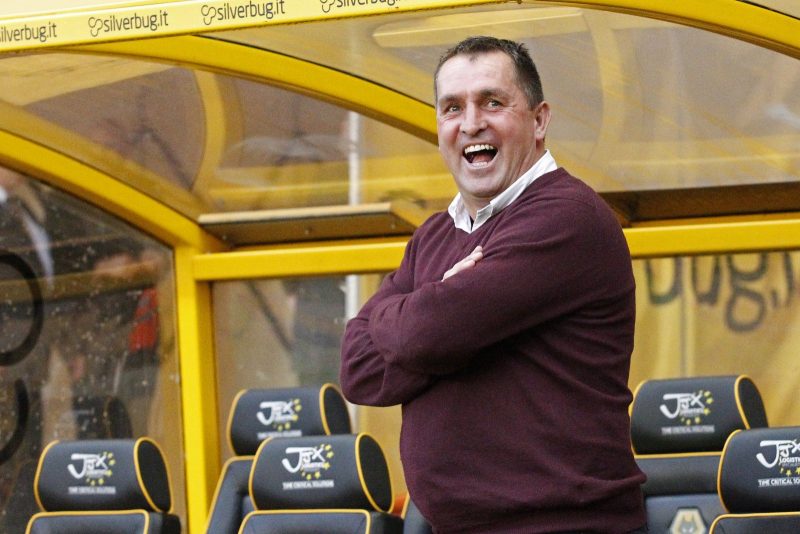 Two weeks ago Martin Allen was enjoying a life of leisure. A bit of punditry. A spot of spring cleaning. A walk along the river.

“I played golf once a week,” explains the erstwhile manager of Brentford, Cheltenham, Notts County and MK Dons.

“I did my garden one day a week. I went to the gym three times a week to do pilates. I walked the dogs every morning along the River Thames. I did refereeing assessments for the Premier League. I did VIP hospitality at West Ham.

“I’ve had the most wonderful year. Relaxing, enjoying myself, keeping fit and generally having a good life. You know – just being kind of normal.

“Then, on Sunday night, I was sitting on the sofa watching the telly when my phone vibrated. It was the chairman of Barnet and he said ‘I need you to start tomorrow’.”

The name on Allen’s phone was Tony Kleanthous. Even without it, the 52-year-old would have recognised the number.

After all, this is the FIFTH time the pair have joined forces. The first was back in 2003, when rookie boss Allen guided the Bees to the Conference summit only to be poached by Brentford.

The last, in 2015, yielded the Conference title. In between came two separate three-game spells, the last of which saw relegation from the EFL averted on the final day of 2012-13.

Now, after dispensing with the services of Rossi Eames, Mark McGhee and Graham Westley, Kleanthous, right, has once more summoned Agent Allen to save a side back in familiar territory at the foot of League Two.

“Yeah, it’s crazy, isn’t it?” says Allen of his on-off flirtation with the north London minnows. “Five times – it must be some kind of record.

“I wasn’t looking to get back in, but I just care about this club. Once you’ve been somewhere and won a championship, you can’t help but feel an affinity. On top of that, the fans have always been really good to me.

“So the fact that it was Barnet, and that I was the one who brought them back into the Football League – I couldn’t stand by and not help them keep that status.”

Curiously, Allen has never been sacked by Kleanthous. Three times he was lured away by better offers – from Brentford, Notts County and Eastleigh.

Once – as now – he signed up only until the end of the season. Is that lack of animosity the key to their seemingly untarnished relationship?

“No,” says Allen, with typical blunt candour. “But I’ll tell you why myself and Tony have a very good relationship.

“He gives me the job, then that’s the last I see of him. He doesn’t speak to me. He doesn’t stick his oar in. He lets me get on with it.

“That’s rare nowadays. A lot of chairman stick their noses in. Who you should play on a Saturday, who you should sign, who should be leaving. Gordon Bennett – you wouldn’t believe how much of that goes on.

“So he lets me do my job and if the players I sign aren’t good enough on the budget he gives me – which isn’t massive – that’s tough luck.”

When it comes to inspiring players, Allen – dubbed ‘Mad Dog’ in his playing days – has plenty of tricks up his sleeve.

During Brentford’s FA Cup run in 2005, he famously swam in the Tees and jumped naked into the Solent – both with the aim of distracting drifting minds.

It works, too. As well as promotion with Gillingham and Barnet, the former West Ham midfielder has pulled off numerous great escapes over the years.

“I did it at Brentford,” says Allen, who took over a side seven points adrift of safety with eight games to play. “At Notts County. Twice at Barnet. Each time we were in sticky situations. Each time, we managed to get out.

“But I’m not going into any detail about how it’s done. You can’t give too many secrets away in this business.

“What I would say is that it’s about keeping things simple and boosting confidence. Get the basics right and the belief comes flooding back. That can take any team a long way.

“I do enjoy these challenges. I really do. When the club’s been written off and everyone’s talking about how rubbish the players are. When everyone’s saying how bad the team is and how we’re going to get relegated.

“Nobody likes getting slaughtered. And all the Barnet supporters have been on the players’ backs. The paying public have been abusive and nobody likes that – nobody.

“But I’ve been here before and each time it’s been a miraculous turnaround. They start winning and they go unbeaten, and when you get on a roll like that anything can happen. Being criticised and dismissed makes a team very dangerous in my experience.”

Dangerous enough to stay up?

“We’ll see, won’t we?” says Allen. “I can talk all day long about how good they look in training but the bottom line is what happens on a match day.

“But look, I’ve gone from cleaning the car and helping around the house – a nice, easy life – to things going completely bonkers.

“My phone doesn’t stop. I’ve got interviews, players, agents – everything. And the only reason I did that was to be successful here.

“If this Barnet team do manage to stay up – even if that’s by one goal on the final day of the season – I’ll be the happiest person ever.”