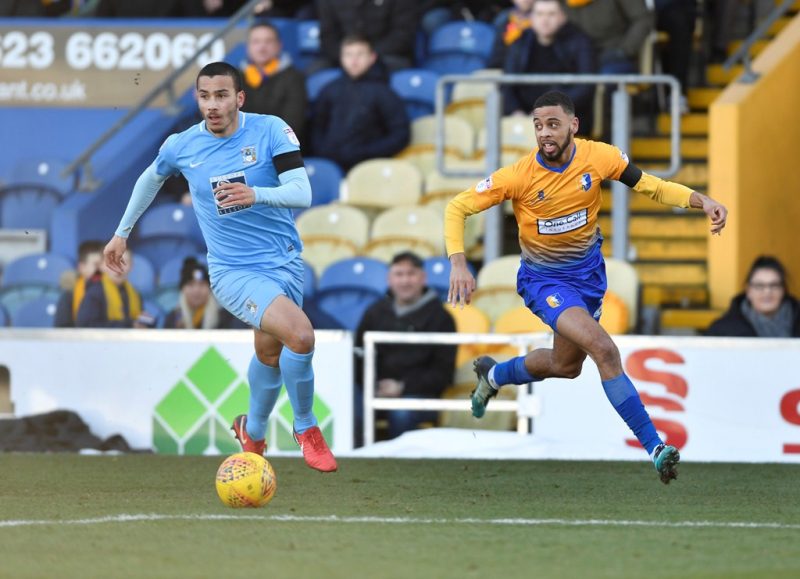 Rod McDonald is desperate to earn promotion from League Two again – to have a real crack at League One.

Coventry’s powerful centre-back stepped up with Northampton a couple of years ago under Chris Wilder, but then found his chances limited in the third tier last season under Rob Page and Justin Edinburgh after Wilder had moved on to Sheffield United.

It means he has unfinished business with League One, though he has to get back there first. The 25-year-old is certainly giving it his best shot.

Heading into this weekend’s fixtures, the stingy Sky Blues have by far the meanest defence in League Two, conceding a paltry 31 goals in 38 games. Yet Mark Robins’ troops are just sixth in the table.

With games left now in singles figures, there’s all to play for. Coventry are currently six points off automatic promotion with a game in hand, but only three points ahead of Lincoln in the fight to land a play-off berth.

Liverpool-born McDonald is optimistic the Sky Blues – down in the bottom tier of the Football League for the first time since 1958-59 – can start climbing the ladder.

“A new manager came in at Northampton after we won promotion and it was a bit of a revolving door,” said McDonald, whose father, also Rod, played for Walsall and whose brother Clayton, 29, plays for Nantwich Town. “From my side, it was a disappointing season – doing so well in League Two and not getting a chance in League One.

“The best thing was to drop down and try to win promotion again. I want to play as high as I can and hopefully I can step up with Coventry.

“If we do, Mark Robins will give me that chance in League One, if not higher. He’s a very good man-manager, he’s very good tactically and he’s helped me massively.

“On a personal level, it’s probably been the best season of my career – because I’m playing week-in, week-out.

“I’ve moved down to Coventry, I’m settled and the manager has been good to me. I’m not complaining.”

So how does McDonald rate Coventry’s chances as the season reaches crunch time?

“We haven’t really had a run where we’ve won four, five or six on the bounce so hopefully we can get a bit of luck in these last games.

“At Northampton we had a lot of older players, but here we have a pretty young team. We have got a lot of good, young players. I’m labelled as one of the older ones and I’m only 25!”

Of course, this season hasn’t been just about the league for the Sky Blues. They had a superb run in the FA Cup, knocking out Stoke 2-1 at home and then triumphing 1-0 at MK Dons before bowing out 3-1 at Brighton in the fifth round.

“It was tremendous,” said McDonald, who spent time at Manchester City and Stoke as a youngster. “Beating a Premier League side in Stoke, going to Milton Keynes and winning in front of 9 or 10,000 away fans. The away support has been tremendous all season and we had some great days in the FA Cup.”

But was it a distraction from the main aim of winning promotion back to the third tier?

“It could have been,” reflected McDonald, who drifted into Non-League after a spell at Oldham and played for Colwyn Bay, Nantwich Town, Hereford United and AFC Telford United before joining Northampton.

“We were playing a few more games in the Cup and you would look at the league table and see we had two or three games in hand, but you would rather have the points in the bag.

“Maybe it did have an impact, but now we are back on form and chasing teams down.”