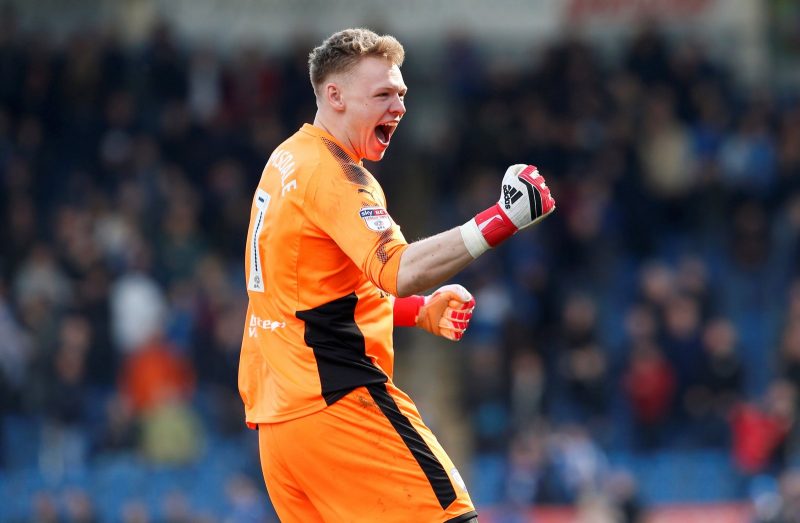 If Aaron Ramsdale goes on to become a top-class Premier League goalkeeper, he will owe a debt of gratitude to Chesterfield.

For not many 19-year-old rookies get the chance to fight it out in the muck and nettles of a League Two relegation scrap. You just can’t buy that kind of experience.

Ramsdale is definitely one to keep an eye on. Bournemouth signed him from Sheffield United for a reported £1m in January last year and sent him out on loan to Chestefield for the rest of the season a couple of months ago.

He certainly had a baptism of fire. Accrington put four past him on his debut for the relegation-threatened Spireites.

Since then, though, the teenager has managed to nail down a first-team spot and show glimpses of why he’s so highly rated. He has clearly learned plenty.

“I was thrown in at the deep end against Accrington,” he said. “I’ve learnt that it’s people’s jobs on the line. Three points or one point means everything.

“You have to be confident with corners and crosses, and you have to take pressure of your teammates. The quality of this league is a lot better than the Under-21s and there is greater physicality.

“I made a couple of mistakes in the first few games but you can’t worry about what the fans are saying or people on social media.

“You just have to show them that you won’t make the same mistake twice and show them what you can do.”
Ramsdale’s new thick skin has been helped by boss Jack Lester.

“The manager has been brilliant since I’ve been here,” he said. “He’s got the aura of being a legend at Chesterfield and we’ve still got players now who played with him.

“They’ll tell stories of when he was playing and how good he was, and he’ll come into the changing rooms after training and have some banter with us.

“We really think we’ve got a good group and the performances are getting better, so if we start turning that into points I’m sure we can finish above the bottom two.

“If we can stay up and I can get 20 games under my belt, that can only be good for the club and for me.”
And one of the plus points is that he knows Bournemouth boss Eddie Howe is keeping tabs on him.

“I didn’t expect to have as much contact with him as I have had, to be honest,” he said.

“He calls me weekly asking how training has gone, talking about games, my lifestyle, if I’m still eating or going to the gym. I’m surprised because he’s got all his own players to deal with.”

And Ramsdale admitted he was shocked when the Cherries swooped to sign him from Sheffield United.
“I was 18 and I’d played two FA Cup games, I’d never played a league game,” he added. “I didn’t think I’d done anything to warrant a big money move to a Premier League club.

“I was surprised but ultimately over the moon that someone had seen something, come in for me and taken a gamble – hopefully I can pay them back.

“You have to believe in yourself. At first, I was a little bit star-struck of the people who I was training with but once you get into it, everyone is human.”