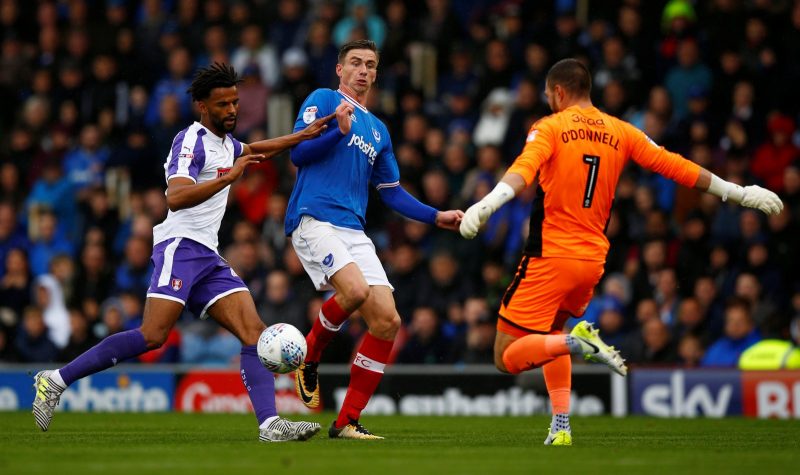 Oliver Hawkins knows he can do a job for Portsmouth as a defender in League One, but admits the thrill of scoring goals is too strong.

Hawkins was bought to score goals, not stop them, but that is where he found himself before Christmas with the club in the midst of an injury crisis.

At 6ft 5in, Hawkins clearly has some of the attributes needed for defending and he put them to good use, playing in six wins from seven games at the back in November and December, a run that included three clean sheets.

But now restored as the powerful bullying centre-forward of Portsmouth’s attack, the former Dagenham & Redbridge ace admits he is delighted he resisted the temptation to move backwards permanently.

“I would not say it out loud, but in the back of my mind I did think it could be my future position at the time,” said the 25-year-old.

“But when I went back up front, I quickly realised the feeling of scoring a goal is so much better.

“I arrived at Portsmouth as a striker and did not expect to play games at centre-half.

“I had played a few times for Dagenham there and I was a last resort there because of suspensions and injuries.

“At Portsmouth, I got chucked in and I did fine. But I am a striker, I want to score goals.

“It has always been in the back of my mind that, if I couldn’t be a centre-forward any more, then I could move back. But I am not looking for it until later in my career.

“When I played for Dagenham at the back a couple of times, a lot of my mates were saying I was a better defender than striker.

“I can certainly do a job and would do it again, but I want to score goals.”

Hawkins has proved to be a valuable addition to Pompey’s attack, with his sheer size causing all sorts of issues for opposition defences.

Bought from Dagenham at the end of the summer transfer window, Hawkins admits it took him a while to adapt to the rigours of League One after a career spent mainly in Non-League.

Now, his self-confidence is unshakeable and, with eight goals to his name, Hawkins insists he truly belongs at this level.

“I probably did not settle in until November or December,” he said. “There were a lot of things I knew I needed to work and improve on.

“I was not playing that much, but I never let my head drop. Now I can confidently say I am a League One player.
“I think I can progress even higher but, if not, then I am happy at this level.

“I am definitely ahead of where I thought I would be. I could be in double figures had I taken all of my chances, but I have also played nine games at centre-half and come off the bench a lot.

“I think I will get to double figures before the season is out and I will be happy with that.

“When I arrived, I thought it would just be good to get a few games and any goals would be a bonus.

“Hopefully, I can progress next season and get 20.”

Where Portsmouth will be next season is still undecided, but an untimely dip in form looks likely to scupper their promotion hopes.

“We have had some bad injuries in the last few weeks and we have had to field a young team,” Hawkins added. “But I am confident we can have a strong finish and get in there.”