Home / Features / Columnists / Dunlavy column: Spitting’s horrible, but ask Pedro Mendes if he’d rather be spat on than elbowed

Dunlavy column: Spitting’s horrible, but ask Pedro Mendes if he’d rather be spat on than elbowed

Posted on February 9, 2018 by admin in Columnists, Featured, Features | 0 Comments 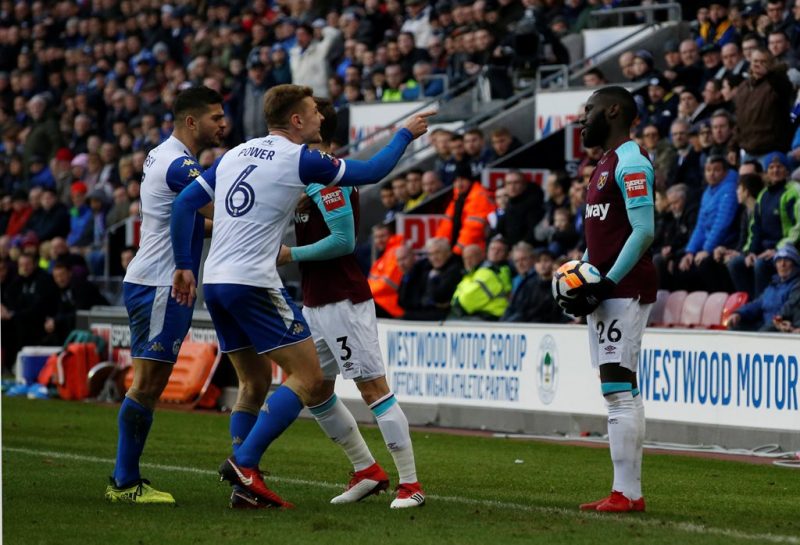 DESPICABLE. That’s what David Moyes called Arthur Masuaku. No anger. No excuse. Just an ice-cool condemnation of his own player.

Masuaku’s crime was to spit on Wigan playmaker Nick Powell with his side already trailing 1-0. The inevitable red card ensured an FA Cup giant-killing at the DW.

“Unacceptable,” added Moyes. “He’ll deserve everything he gets off the FA – and he’ll be getting something off us as well.”

He certainly did. A six-match ban from the FA, just like Leeds’ Samu Saiz in Round 3. West Ham, meanwhile, are consulting with the PFA as to whether they can hit Masuaku with more than the maximum fine of two-weeks’ wages. In his case, that’s £50,000.

Sunday’s headlines screamed of a ‘stomach-turning’ incident. Masuaku was variously described as ‘vile’, ‘disgusting’ and ‘abhorrent’.

All of which begs a simple question: Aren’t we over-reacting to a bit of spit? Yes, it’s dirty. It’s disrespectful. But, ultimately, it’s nothing a box of Persil can’t rectify.

Assessing the incident on Match of the Day, pundit Dion Dublin said gobbing on an opponent was the “lowest of the low”.

Those thoughts were echoed by Steve Claridge. “It was and is the unwritten rule that you don’t do it,” said the former Leicester striker. “You don’t lower yourself to that level. It’s not even a football thing. In general life, you just don’t do it.”

We all understand the sentiment. In the UK, spitting as an insult is a cultural taboo – much like the throwing of shoes in Arabic countries.

That’s not to say this was some sort of social misjudgement on Masuaku’s part. After all, it’s not like everyone in France settles arguments with a gobbet of phlegm.

Nevertheless, the gesture has a resonance here beyond its physical impact. It is an attack that implies the victim is unworthy of common decency.

Rationally, however, the punishment simply does not fit the crime. Under FA regulations, spitting on an opponent carries a minimum six-game ban.

Under those same regulations, the use of discriminatory language is punishable by a minimum five-game ban. Are the FA really saying that doling out racist, sexist, or homophobic abuse is less serious than spitting on – or in some cases, simply at – an opposing player?

Even when discretion is used, the sanctions remain out of kilter. Luis Suarez received an eight-game ban for calling Patrice Evra a “negro” in 2011, effectively making his misdeed just 25 per cent worse than Masuaku’s.

On the subject of eight-game bans, let’s not forget Ben Thatcher. In 2006, the defender was playing for Man City when he delivered a savage forearm smash to the head of Portsmouth’s Pedro Mendes.

The Portuguese midfielder was knocked unconscious before being taken to hospital with a suspected fractured skull. 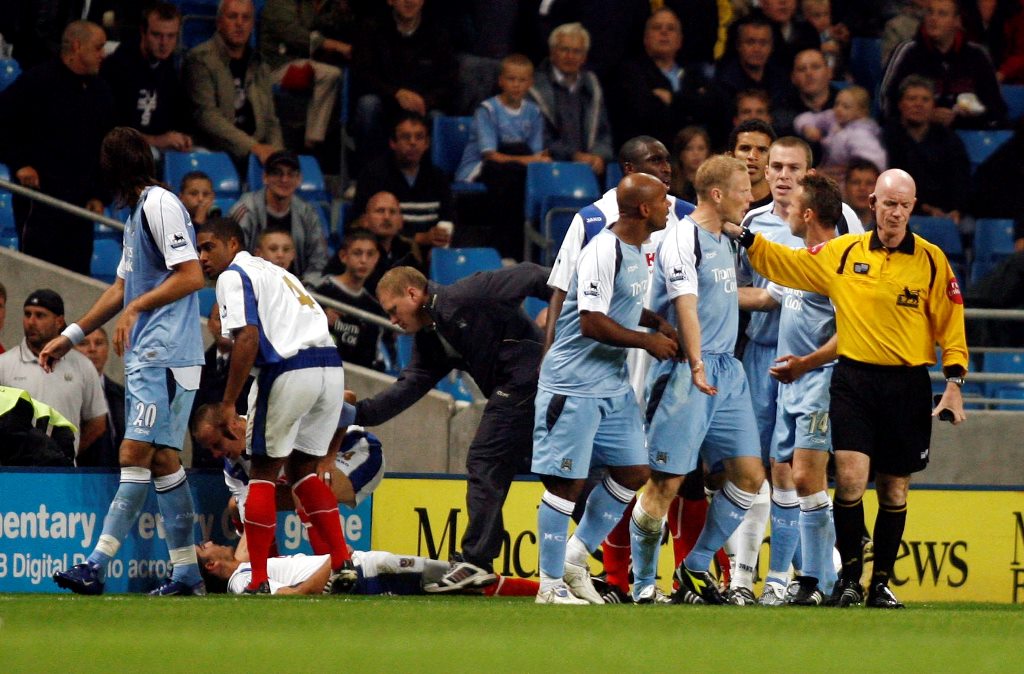 Violent conduct: Pedro Mendes lies motionless on the pitch at the City of Manchester Stadium after Ben Thatcher’s thuggish elbow to his head (Photo: Action Images)

Even in the Mendes case, Thatcher’s ban was an exception. As a rule, violent and reckless offences rarely incur more than three games. In other words, you can snap legs, break noses and generally act like a thug and still be treated half as harshly as Masuaku.

This skewed severity is equally apparent in the responses.

Suarez, with typical belligerence, protested his innocence and bleated about linguistic nuances, all while cretinous team-mates backed him up.

Masuaku, on the other hand, was forced into grovelling contrition. “I want to say sorry for my actions,” said the Frenchman. “I let down my team-mates, the manager, coaches, board and fans.

“It was in the heat of the moment and out of character for me, but I know it was totally unacceptable.

“I will learn from the first red card of my career.”

Saiz, sent off in Round 3 for spitting at Newport’s Robbie Willmott, also sounded like a repentant murderer in the dock.

Spitting is horrible. But ask Mendes if he’d rather have been spat on. Ask Evra. Ask anyone who’s ever had their career ended by a knee-high lunge. Ask a kitman if he’d rather scrub a jersey free of spit or blood. There are plenty of despicable acts in football. Spitting is not the worst  of them.