Home / Featured / Paul Hurst EXCLUSIVE: ‘Dream start has surprised all of us’

Paul Hurst EXCLUSIVE: ‘Dream start has surprised all of us’

Posted on November 3, 2017 by admin in Featured, Features | 0 Comments 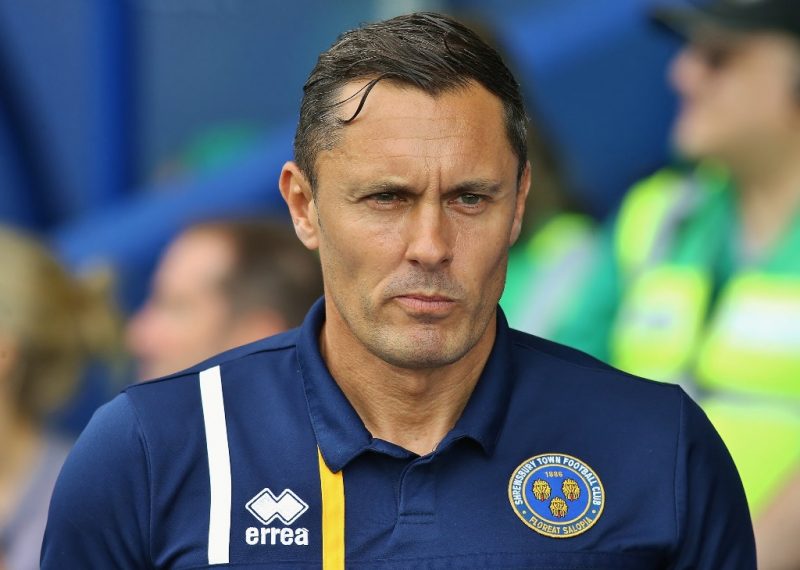 MANAGER Paul Hurst is a qualified journalist so if he was reporting on his Shrewsbury Town team what would he write?

Sitting in his office at the training ground, he thinks a minute.

“Shrewsbury in dream land. Something like that,” he says.

They were unbeaten in 15 games until their run was ended by Grant McCann’s Peterborough United last weekend. Hurst doesn’t know what Shrewsbury’s club unbeaten record is. He’d need to check that for his piece.

It’s 16 games set in the 1993-94 season when Fred Davies got promotion from the Third Division to the Second.

“Maybe I could come up with something slightly better than ‘dream land’ given a bit more time,” says Hurst who got his degree in professional sports writing and broadcasting nine years ago at Staffordshire University.

He was leaving Rotherham United and a 15-year, 438-game career in their defence and had enjoyed doing the odd bit of commentary and decided to take it up full-time.

“I’m glad I had the opportunity to do what I’m doing now in management,” admits Hurst.

“But journalism was a way to stay involved, talking or writing about football and maybe I could have fallen into something like that.”

He worked for Rother FM, Radio Sheffield and had his name in the Rotherham Advertiser every Friday.

“They’d give me numbers to ring up to get stories,” he recalled. “It was all on work experience and I’m not sure if I’d have written it quickly enough if it had been my job permanently.

“But when I looked at it on a Friday my name was in there and they’d left it as I’d written it, not changed much. Not the most lengthy of pieces, but it was a start, they didn’t throw it in the bin, and it could have been the possibility of a career.”

Nearly a decade on and Hurst has gone on not to write about Mourinho and Guardiola, but compete with them as the only unbeaten manager outside of Manchester.

On the way back from a 1-1 draw at Plymouth last Saturday, he was brought right up to date.

“I was looking online and I was sent Harry Potter with my face dubbed on it and it was the film, Harry Potter and the Surprise Package,” says Hurst.

“That’s what we are. It’s a massive surprise to everyone, ourselves included, where we are.”

It will be a year on Tuesday since Hurst, 48, took over at Shrewsbury. They were bottom of League One with ten points from 15 games, six points adrift of safety and had won just two games.

Now he’s looking at Championship football for Shrewsbury for the first time in 21 years.

There’s an apology from the journalist in Hurst when he comes up with the cliché ‘take every game as it comes’ to head off some of the expectation built by a run that is even better than that Shrewsbury Town god Graham Turner achieved (lost one in his first 14) when he took the club into the second tier in 1979.

“It is no surprise in that we felt we were a lot better than last season,” says Hurst. “But to what extent, when you look at the league and how teams have improved, we didn’t know.

“I was speaking to someone on a LMA (League Managers Association) course this week and he said ‘how many clubs in League One expect to be in the play-offs, minimum’? A hell of a lot.”

Hurst, now 43, made the headlines for papers in Ilkeston, Boston and Grimsby in a successful eight-year Non-League career, initially in tandem with Rob Scott, now scouting for Brentford, before arriving in Shrewsbury.

He signed 14 players in the summer. That’s the same as Harry Redknapp at Birmingham before he got the sack so it shows there are no guarantees.

Hurst went for Non-League, what he knew, the hungry ones, the ones who turned up maybe grudgingly for training twice a week after work and now are full-time, enjoying a new training ground even on a pouring wet Thursday afternoon.

“The previous manager at Boston said I’d done well to get the players to train and he only had six or seven at times,” he said. “I was thinking they are not going to make millionaires, but they are getting paid. They should be at training.

“We built a culture, an expectation of them, a tight group and that is what we have replicated here at Shrewsbury.

“Look at our training ground and, the rain aside, I think you’d say it is a good set-up.

“You can easily fall into the trap of signing an experienced player whose been there, done that, looks great on paper with his history. If you sign a few of those you’ve got to be very careful because some are still in the game who haven’t got the drive.

“They might do alright for you from time to time, but have they got that hunger? Do they appreciate what’s in front of them?

“It’s like your wife or girlfriend. When you first meet you want to spend every day with her, but then it becomes the norm, you want a little break.

“But, overall, I do think there is a strong hunger in these players, an appreciation of what they’ve got given and where they have come from.”

The players are all paid roughly the same, no stars, no favourites, says Hurst. “There is no player here where I go ‘He’s got to play, so he’s in’.

“I didn’t think our recent away performances had been that good so I made changes for the midweek Bristol Rovers game. We were four-up at half-time. All the ones I’d changed did well. There was every chance of them staying in the team against Fleetwood.” 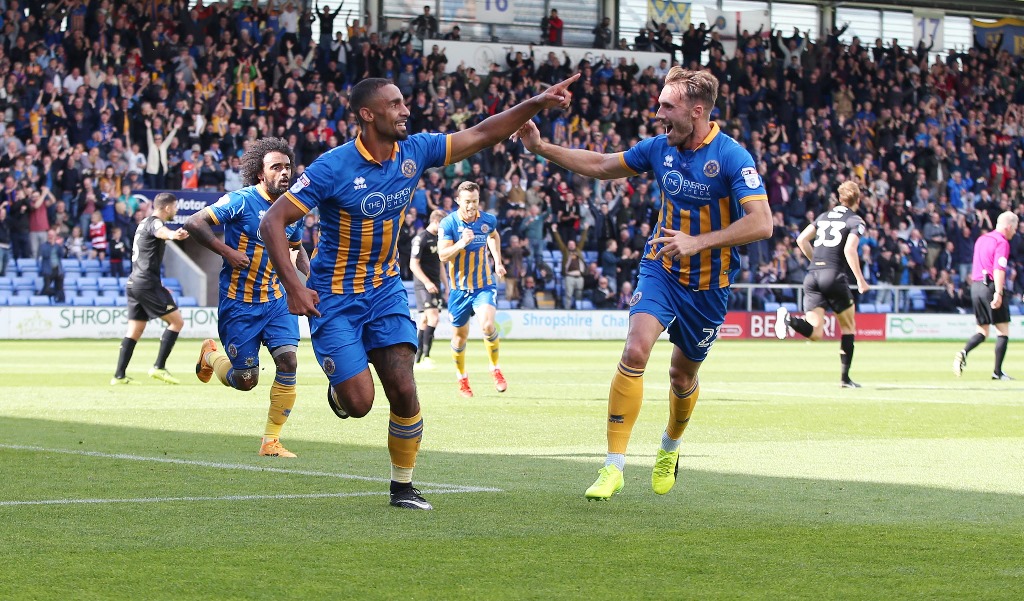 Payne game: Striker Stefan Payne has been one of the stars to deliver to the Shrews’ promotion push

Hurst accepts that if he wants to become a Championship manager and on into the Premier League, he will have to take a team up.

“Resources would change and who you are playing, the press would be ten-fold from what it is here, but my approach would be the same,” he says.

“You pick up pointers along the way, you become more comfortable in stressful situations that you can’t go on courses for, so I like to think I have improved.

“But my ethos, my beliefs, my approach hasn’t changed and it wouldn’t if I was managing higher. The reality of it is that as much as I have that ambition, I probably will never find out. What are the chances? They are very slim.

“Even the Championship, you look at it, it’s so hard unless you can progress with that team. If you are like Eddie Howe. If you are like Sean Dyche. You almost feel as if you have got to get promoted to get in there.

“Look at Chris Wilder. From Non-League, he’s worked up. A Blade who lives in the city, absolutely flying with Sheffield United.

“But would a Premier League club come and get him?

“The people at clubs that make these decision should do much more homework than it seems they do. It seems as if common sense goes out the window.

“I don’t know if they get wined and dined, whether they are in this fantasy world or something. But what is the FA, English football, doing to promote English managers?

“Why go on these courses when all you end up doing is being overlooked?”

There’s a story to be written here…