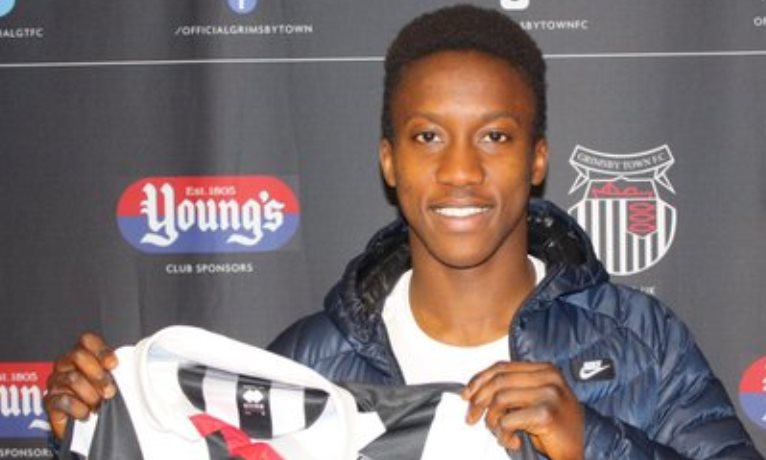 HIS younger brother Karamoko may be one of football’s most talked about wonder kids, but Siriki Dembele is making a big name for himself at Grimsby Town.

The 20-year-old joined the Mariners in the summer after a successful trial and he’s already got supporters buzzing with excitement.

With his front-foot attacking style, Dembele is getting fans off their seats and becoming the talk of the town.

It’s not unusual in the Dembele household, however, with 14-year-old Karamoko a Celtic prodigy.

Clips of his precocious talent swept the internet, and the London-born talent is the subject of an England-Scotland tug-of-war.

Big brother Siriki is always on hand to lend guidance and is determined to show the benefits of hard work.

“My youngest brother Hassan is at Celtic, too,” Dembele told The FLP. “He’s eight so he’s still got a way to go, but they are both doing well.

“Karamoko is a very good player and he’s really focused on being the best. He looks forward to every challenge he has and he’s enjoying it.

“I’m hoping I can create them a good path. I try to help Karamoko in any way possible.

“I give him advice every single day, to keep him focused on what he’s doing and not let anything distract him.

“That’s also what I’m trying to do here, to keep my head focused on playing well for Grimsby. I’ve heard some good things about my performances but I try not to get too carried away.

“I’m just trying to keep doing what I’m doing, if not even better. It’s just the start. I know I’ve got a long way to go.”

Dembele started his youth career with Dundee United and last season was part of the Nike Academy, who play the likes of Manchester City, Liverpool and Barcelona.

Injury caused a move to to a Championship club to  fall through, but this summer he signed his first professional deal with Russell Slade at League Two Grimsby.

“I always believed one day it would come for me,” he said. “My agent Danny Williams has worked so hard to get me this chance at Grimsby so I’m very thankful.

“Playing in League Two is good because first-team football is important for every player aged 17, 18, 19, 20. It’s a different environment, professional, with jobs you have to do on the pitch, but I think I’m adapting to it quite well.

“The fans are unbelievable. I’ve been getting a great reception and great support from them.

“I’m the type of player who tries to make things happen for the team, to change the game positively in any way I can and hopefully get the fans off their seats.

“The manager’s great. He’s given me the opportunity to express myself and be a part of this. All the staff and my teammates been really encouraging, too.”

What about his own role models?

“I’m my own idol but I do admire Cristiano,” he said. “It’s not just his football ability, but his personality and mentality is unbelievable.

“But I like to play my own way, have a different style to everyone and be Siriki Dembele.”

*This article originally featured in The FLP on August 13. The FLP is available every Sunday!