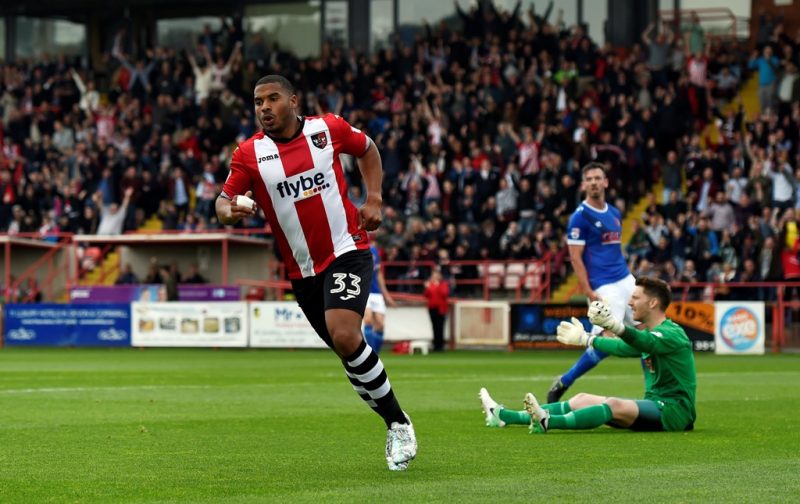 Even when it appeared certain that Exeter would be dropping points for just the second time this season, Paul Tisdale’s men grabbed a 94th minute winner to ensure that would not be the case at Barnet.

The hosts had lead through Shaq Coulthirst’s opener, only for Reuben Reid to continue his glittering form with an equaliser for the Grecians. Club-record signing Jayden Stockley then struck at the death to preserve Exeter’s unbeaten record.

Notts County are three points behind the leaders after their 1-0 win at home to Swindon. Jon Stead’s penalty ensured the Magpies moved up the table, with Accrington surprisingly losing against Grimsby.

Kayden Jackson scored for Stanley, but goals either side of half-time from Sam Jones and Martyn Woolford gave Grimsby their third win of the campaign.

Michael Brown’s job is hanging by a thread at Port Vale after the bottom side lost again, this time to Luton. The Valiants have just one win this season, and a Jack Stacey strike coupled with a Ben Whitfield own goal consigned them to defeat at the hands of the Hatters.

Lincoln’s fine start to life in the Football League continued as they beat Forest Green Rovers at the New Lawn. Harry Anderson’s goal moved the Imps up to fifth. Fourth place Coventry also won, Duckens Nazon and Peter Vincenti on target in their win over Crawley.

Chesterfield moved out of the bottom two with a 1-1 draw at Colchester. The Spireites were ahead through Louis Reed, but Brandon Hanlan ensured the hosts came away with a share of the spoils.

Newport County are in sixth after their 1-0 victory over Cheltenham, Padraig Amond’s strike doing for the Robins. Just below them, Stevenage were held to a 1-1 draw by Crawley. Ibrahim Meite cancelled out Danny Newton’s goal for Darren Sarll’s side.

Cambridge won at Crewe, Jabo Ibehre scoring the only goal of the game. Meanwhile, Mansfield against Wycombe finished goalless at Field Mill.

Yeovil and Morecambe shared the spoils after a 2-2 draw at Huish Park left the two teams 17th and 20th respectively. Francois Zoko and Sam Surridge appeared to have given the hosts a comfortable lead, only for Adam McGurk and Kevin Ellison to fire back.