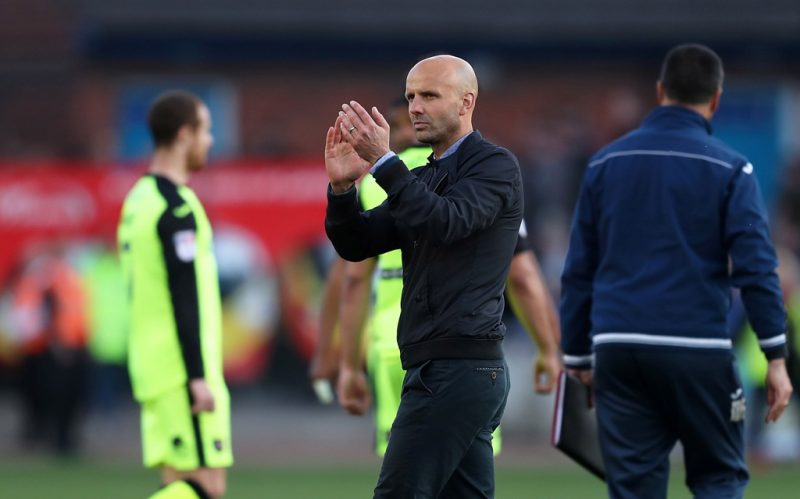 There is only one man in the top four divisions of English football who has been in their post longer than Exeter City’s Paul Tisdale. But while Arsene Wenger flounders at the Emirates, the Grecians go from strength to strength under their mercurial manager.

Saturday saw them come from two goals down to rescue a 4-3 win over Cheltenham Town, showing all the heart and grit that was so abundantly absent from the Gunners 4-0 loss to Liverpool the next day. That victory took Tisdale’s side to the top of this nascent League Two table, two points clear of Newport, Stevenage and Crewe.

So why then, when Wenger appears no longer able to motivate his players is Tisdale so clearly capable of stirring his? He’s been at the club 11 years after all. Perhaps because, aside from their club’s shared belief in patience, the two men don’t have that many similarities.

Fashion-wise? I think we can call that 1-0 Tisdale. Where Wenger is famous for his never-ending coat, the Exeter boss favours a more diverse, vibrant selection of hats, scarves and the like. Adaptability? In the hustle and bustle of League Two Tisdale knows when to take a break from his favoured passing game. Can Arsene say the same?

But then this isn’t another Wenger bashing article.

Instead, credit must be given – and given to Tisdale’s employers as well as the man himself. Relegation often spells the end of a manager’s spell at a club, but yet Exeter kept faith in Tisdale after they lost their League One status in 2012. One bad season didn’t erase the many positive ones that came before it, including back-to-back promotions from the Conference to League One between 2007 and 2009.

Furthermore, the Grecians could conceivably have pulled the plug on the Tisdale era in the five years since their return to the fourth tier. They’ve come close to it, but promotion has alluded the club since they rejoined the League Two rat race – but this season things are looking up. Will they win again this Saturday? If you think so, get the best football tips at kick-off here.

So having tasted the delights of League One football they could have decided to get rid of Tisdale as a result of his failure to get them back there. But they didn’t. Continuity won out. Common sense succeeded.

And here they are, riding high at the top of the table after an unbeaten start to the season. Tisdale’s famous sharp, neat style of football perseveres, and the club perseveres too – recognising what they have in the former Team Bath boss.

No one gets promoted in August, but the signs are good for the Grecians. They lost their young starlet Ollie Watkins to Brentford, yes, but they’ve brought back former Exeter man Dean Moxey as well as centre-back Luke Croll from Crystal Palace and attacker Ryan Brunt from Plymouth. They all cost nothing of course.

This isn’t a flashy club, but it’s a prudent one, a patient one – qualities that are increasingly rare as Premier League money trickles down the Football League and makes madmen out of chairmen.

Exeter will hope this season is a third promotion campaign under Tisdale, and it would be just rewards for the patience of both club and manager alike.