Referee apologises for getting rules wrong in Newcastle penalty incident 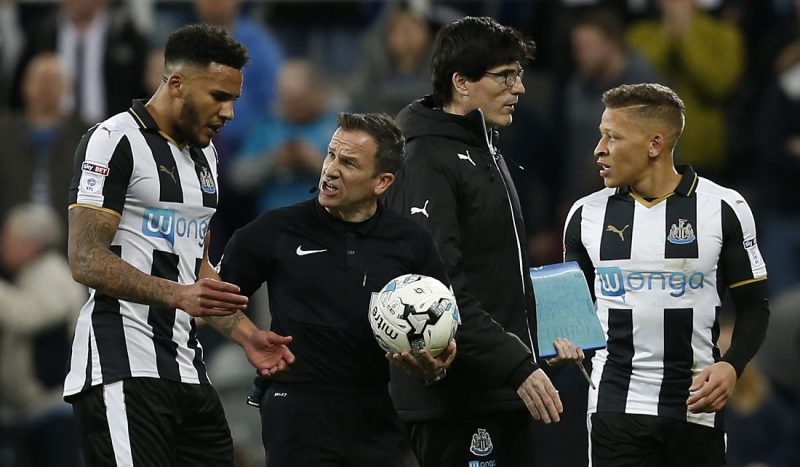 The official awarded a penalty to the home side in the first-half which winger Matt Ritchie duly converted. But Stroud out ruled the goal for Dwight Gayle encroaching inside the 18-yard box.

Instead of having Ritchie retake the spot-kick as FA rules permit, the veteran referee awarded Burton an indirect free-kick to the bewilderment of Newcastle players and boss Rafa Benitez.

A statement from the Professional Game Match Officials Limited later admitted Stroud and his assistants had made a mistake.

It read: “In this evening’s EFL Championship game between Newcastle United and Burton Albion, referee Keith Stroud awarded Newcastle a penalty in the 29th minute.

“As Matt Ritchie took the kick, Dwight Gayle encroached in the penalty area. An indirect free-kick was awarded to Burton, but the Laws of the Game state that that the penalty kick should have been retaken.

“Unfortunately the referee has misapplied the Law. Keith and his team are understandably upset at the lapse in concentration and apologise for the mistake.”

47-year-old Stroud took charge of his first match in the EFL back in 2004 and did not draw any criticism from Toon boss Benitez in his post-match press conference.

“The referee and me have been talking,” Benitez said, opting to remain neutral in his comments.

“We need to move forward. We can’t change what happened.

“We got three points. We have to be ready to be stronger for the next one. After the incident, we were losing our focus. We won.”

“I didn’t think it was a penalty. It was very harsh,” Clough said. “After that I have no idea what happened. The referee makes the decision and you move on.”