Home / Features / Columnists / Dunlavy column: Fawaz will reap the rewards of egotism and misrule at a failing club

Dunlavy column: Fawaz will reap the rewards of egotism and misrule at a failing club 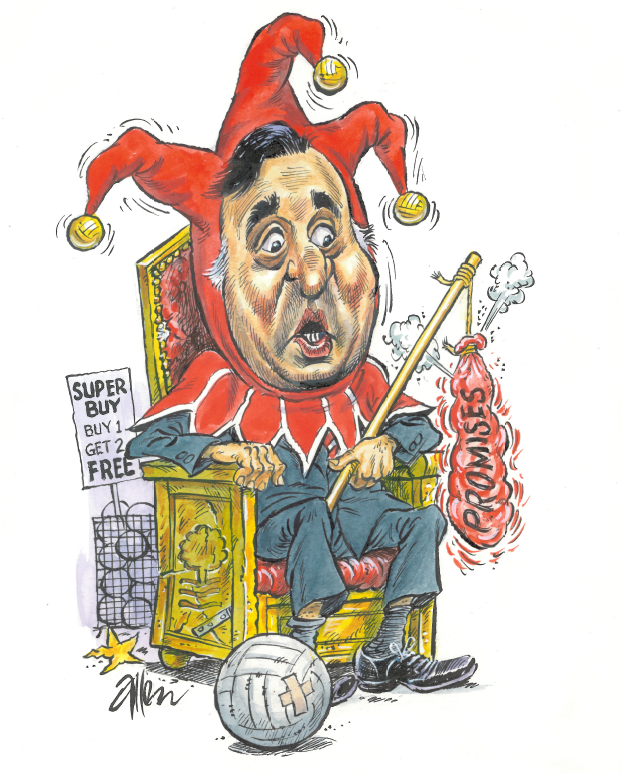 FAWAZ Al-Hasawi walked into the City Ground surrounded by beaming family members and a horde of supporters giddy at the riches he promised.

“The third star will be on the shirt when I am owner,” promised the Kuwaiti, who dreamed of seeing his statue erected alongside that of Brian Clough.

Now, outfoxed by John-Jay Moores, despised by supporters and saddled with a club he no longer wants, Fawaz sits atop his tattered throne like the benighted Macbeth, alienated and abandoned, reaping the grisly rewards of egotism and misrule.

A joke. A failure. A man who arrived with no knowledge of how to run a Championship football club who has since learned diddly squat.

Those dubious achievements could yet be capped by relegation to League One after a season that began with the controversial sale of £13m star Oliver Burke and now lies in ruins following the collapse of the proposed £50m takeover.

Moores, the former owner of MLB side San Diego Padres, was supposed to be the man who rescued Fawaz from this mess of his own making. His empty-handed return to the States is a disaster for supporters sick of seeing their club run like a backstreet bookies.

Fawaz likes to paint himself as a good-hearted fool, honest but flawed. Whose passion for football and ambitions for Forest were undermined by a catastrophic lack of acumen.

A fool he certainly is. This is a man who interrupted a board meeting to ask why the club were spending so much on footballs when the local Tesco sold them for a fiver.

Who likened the odious Billy Davies to Sir Alex Ferguson. Whose insistence – consistently and ludicrously denied – on meddling in team selection cost him the services of Neil Warnock, Oscar Garcia and, most recently, Gary Rowett.

Fawaz even acknowledged this recently when he admitted his hope that the club’s new owners would be “more professional”.

Sympathy, however, should not be forthcoming. If Fawaz knew his limitations, why didn’t he act on them? Why did he choose to operate without a chief executive, chief scout or head of recruitment, despite possessing the means to employ them?

In 2013, a fawning BBC documentary visited Fawaz at his palatial home in Doha, complete with Bobby Moore mural, golden furniture and a garage full of supercars. “I don’t listen to nobody,” he boasted. “I listen to my decision and that’s it.”

And that is it. Fawaz doesn’t want advice or help. Like a kid in the playground jealously guarding his ball, he doesn’t want anyone else to play. Childish. Irresponsible. Unforgivable.

Nor should we believe his claims that he doesn’t care about money. If that was the case, why were players’ wages and bonuses repeatedly paid late?

Why did he make extraordinary demands of one prospective buyer, including a £480,000 annual salary and 20 per cent of future profits?

Sources close to Fawaz claim the most recent deal collapsed because Moores reduced his offer at the 11th hour. For his part, Moores insists he offered ‘significantly enhanced’ terms in a fresh offer this week.

Whatever the case, £50m was always an unfeasibly steep asking price for an 80 per cent share in an ailing club and, given Forest’s recent slump – combined with Fawaz’s unpopularity – any last-ditch reduction an entirely predictable play by Moores.

If you agreed to pay £200K for a house in October only to return four months later and find the roof caved in, you’d probably haggle, too. And, if you really cared for the club, wouldn’t you go back to the negotiating table?

With Moores gone, Fawaz is again making the right noises and – promisingly – the appointment of a finance director suggests they have substance.

A chief exec is on the way and the quality of any new manager will be a good barometer of the owner’s commitment.

If Fawaz genuinely does take a back seat and leave the experts to run his club, Forest have hope. Sadly, precedent suggests that only getting shot of him completely will give them a chance. Because right now, the third tier looks a lot more likely than a third star.

*This article originally featured in The FLP’s 22 January 2016 edition – you buy the paper every Sunday from your local newsagent/supermarket. 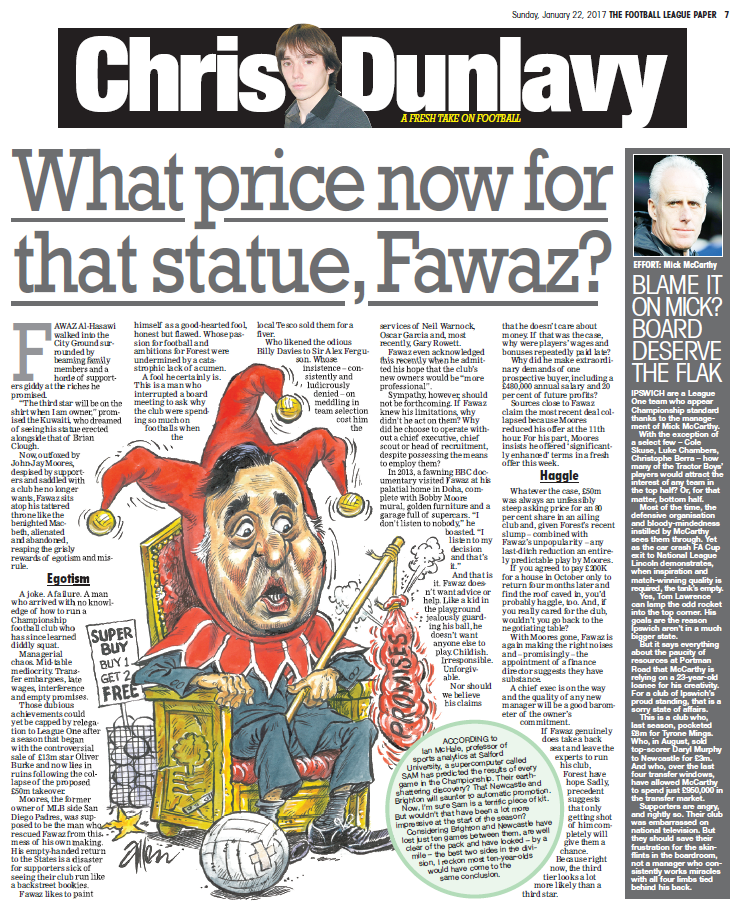