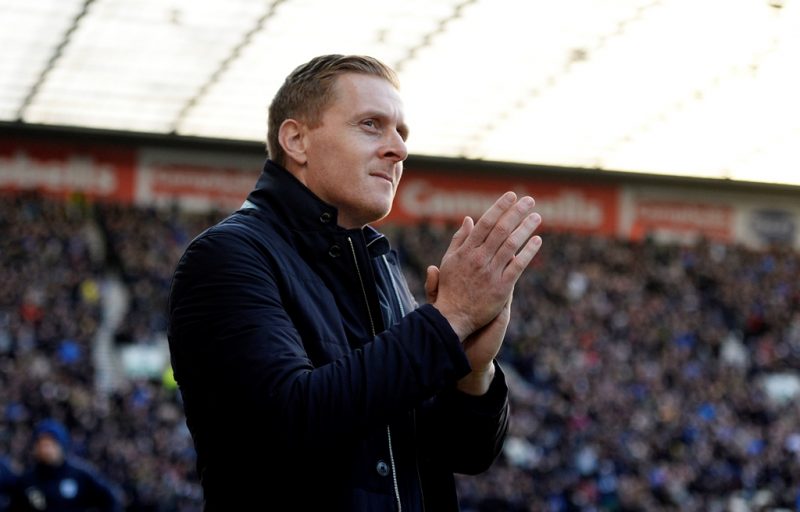 GARRY Monk strode into a viewing gallery in Leeds’ Thorpe Arch training complex, settled before the array of microphones and grinned.

“What are we going to talk about today then?” said the Whites boss. He, like everyone else, knew perfectly well that only one topic was on the agenda.

Andrea Radrizzani, an Italian media mogul who made his fortune selling football TV rights in China and the Far East, this week bought a 50 per cent stake in the club.

In public, the 42-year-old has made all the right noises about working hand-in-hand with his compatriot, who is due to start an 18-month ban in February for breaching FA agent regulations during Ross McCormack’s £11m transfer to Fulham in 2014.

“I am delighted and proud to have acquired a 50 per cent stake in such a prestigious football club,” he said. “I am excited by the challenge ahead and I will work alongside Massimo and everybody at the club to make Leeds United as successful as possible.”

In reality, the deal includes an option to buy Cellino’s remaining shares and that is exactly what Radrizzani intends.

How complicated that handover ends up will largely depend on which division Leeds find themselves playing in next season.

Upcoming sanction aside, Cellino has twice been banned by the EFL and has grown weary of fighting the authorities in the Championship. Should the club fail to win promotion, he is likely to step aside.

Yet Leeds’ surprise renaissance under Monk has given the 60-year-old pause for thought. The Whites lie fifth in the table and, with a £170m prize for winning promotion, Cellino is understandably reluctant to bail out yet. That is why he has clung to his share of the club.

Where does that leave Monk and his squad? So far, Radrizzani has said nothing regarding transfer funds, or plans to repurchase either Elland Road or Thorpe Arch – a stated aim of Cellino when he took control in 2014.

Nor are there any indications that the new co-owner will even be based in the UK, or who Monk will answer to in this unique 50/50 split.

“I’ll find that out when I sit down with both of them this week and talk about how they want to approach things,” said the former Swansea boss, whose side travel to Cambridge United in the FA Cup third round tomorrow night.

“It’s not about what I want. It’s about what they want. They are the owners of the club and they’ll have a vision – an idea of how to go forward.

“I’ll give my views from the football side, which I’m sure they’ll want to hear. And what I’ll say is that it’s a a step-by-step process. Keep improving, keep putting building blocks in place.”

So he hasn’t been promised a £20m windfall?

“I don’t think the world works like that,” he smiled.  “And even if it did, we’ve been pretty successful off a modest budget.

“There are a lot of teams with a lot more money than us. But for me, it’s not about that. It’s about the foundations. The values. They are key. Yes, we need one or two in January but nothing more drastic than that – with or without money.”

Monk, narrowly beaten to the December manager of the month award by Brighton’s Chris Hughton, has worked miracles in his seven months at Elland Road.

Though slow off the blocks, the Whites have won 13 of the last 19 matches and dropped points at home only twice since August. After so many years of upheaval and disappointment, both crowds and optimism are on the rise.

Indeed, while heads are likely to roll in the boardroom as Radrizzani installs time-honoured lieutenants, the new co-owner made it clear that he was “very impressed” by Monk’s efforts in the dugout. Which, according to winger Stuart Dallas, is just as well.

“What the manager does on the training pitch is obviously important,” said the Northern Ireland international, set to make his 19th appearance of an injury-hit season tomorrow.

“But the main things is his belief in us. He told us on day one that we were a good group of players – that he knew what we could do and that we didn’t believe in ourselves enough.

“Last year, it was maybe the case that we won two matches and then lost the third. It was almost like we’d done enough. He’s changed that mentality completely.” 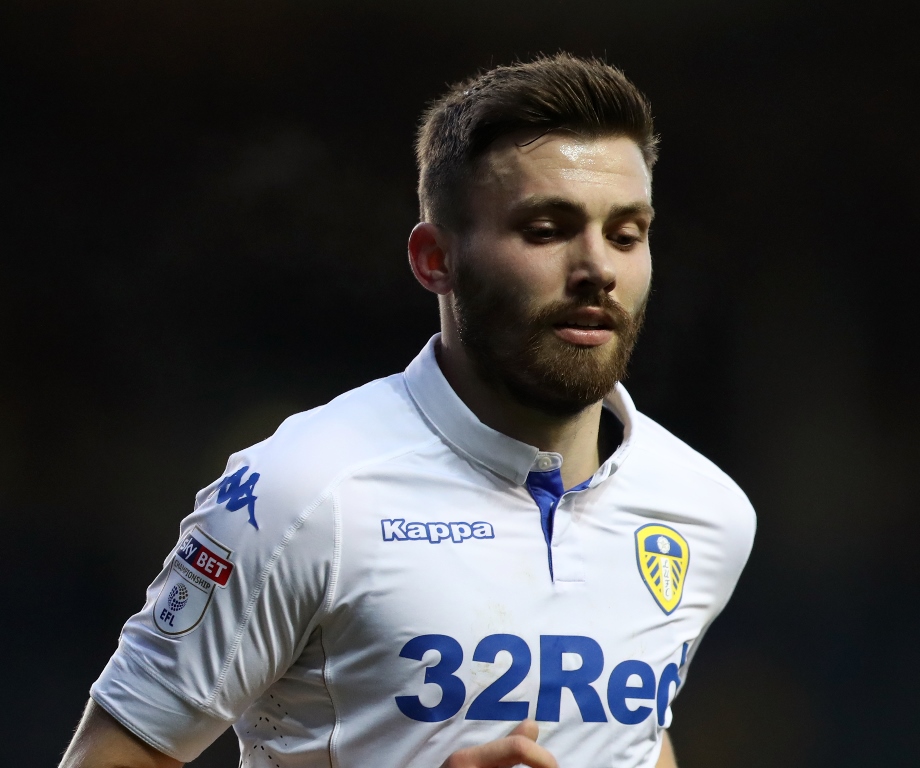 By way of example, Dallas points to that formidable home record – a stark contrast to last term when they won just seven times at Elland Road all season.

“It’s hard to pinpoint why. Perhaps losing bred a lack of confidence. Again, the manager just gave us the belief that we were good enough to play here, that the fans would back us if we got it right.

“And he was right. Now it’s a fortress. Nobody likes coming here anymore. Those fans have got us over the line in recent weeks. The crowds are getting bigger every week because they can see we’ve got something special here.”

So will Cellino and Radrizzani have a Premier League club to fight over in May?

“If people want to talk us up they can,” added Dallas. “But we know what we’re about and we know how good we can be. We’ll go about our business quietly and see where it takes us. But the belief here is sky high right now.”

Born in Milan, the 42-year-old is a public relations graduate and co-founder of London and Singapore based media rights group MP & Silva. Started in 2004, the company specialised in distributing broadcasting rights for the world’s major football leagues in China and Asia. Radrizzani was CEO until 2013. Following rapid growth, Chinese investment group Everbright Securities purchased a 65 per cent stake in MP & Silva for over $1billion in 2016. A genuine football fan, he is also the founder of Play for Change, a sports-centric charity that aims to help disadvantaged children through health and education programmes. Vastly experienced in negotiating broadcasting deals, Radrizzani is expected to ally with Derby chairman Mel Morris in fighting to improve the EFL’s £90m TV rights package.

*This article originally featured in The FLP’s 8 January 2017 edition – buy your copy of The FLP every Sunday for £1.50. 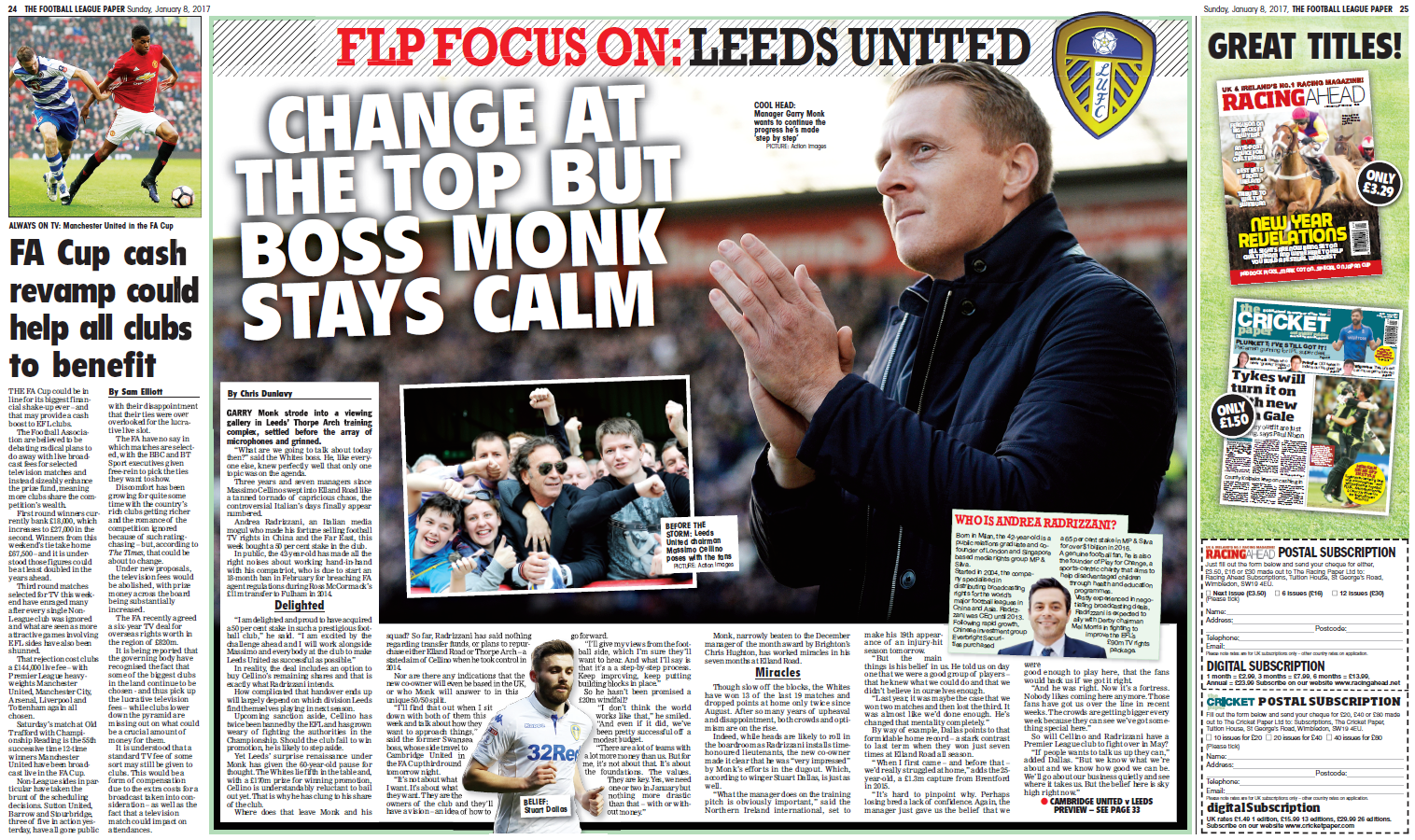