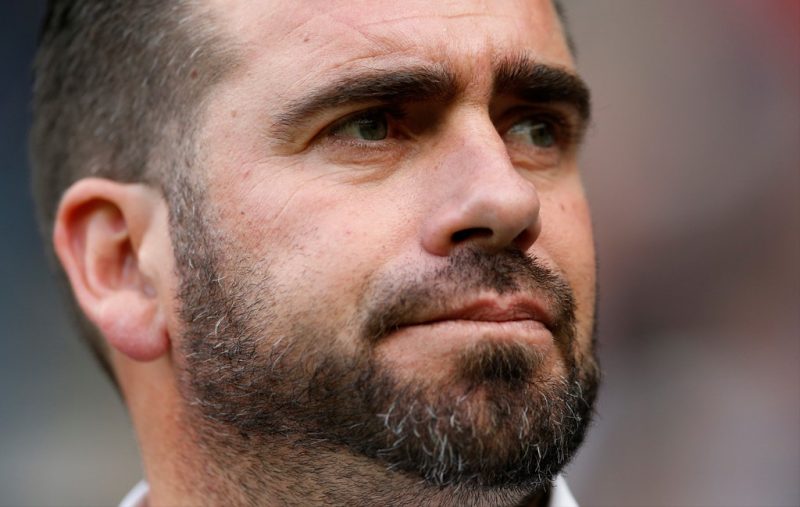 FOR a man whose playing days in England were widely regarded as a failure, Bruno Ribeiro’s affection for our shores is profound.

From the day he took his first coaching course in 2001 to the day he was named Port Vale manager 15 years later, working on these shores was  his primary ambition.

“Working in England – that is the biggest dream,” he told the Portuguese media after leaving Vitoria Setubal to join Bulgarian champions Ludogorets in 2015.

“This has postponed my plans but I will return to work in this fantastic country. It is the country of football.”

Yet, if Ribeiro’s eventual return to England in June suggests a determined plan of action, his initial arrival was the epitome of serendipity.

In May 1997, Leeds manager George Graham flew to Porto to run the rule over a prolific young Boavista striker named Jimmy Floyd Hasselbaink.

On the night, however, his eye was drawn not to the burly forward with the cannonball shot but to an elegant winger dictating play for opponents Setubal. That man was Ribeiro and, just weeks later, a £500,000 offer took him to Elland Road.

From the outset, the 22-year-old embraced his new life.

“I settled in quickly because I had to,” he recalled. “There wasn’t any other choice. I had to adapt, learn the language, get used to new food and knuckle down in training.

“But the staff were fantastic. I quickly made some good mates and, although the training was much more intense to what I experienced back home, I enjoyed it.”

Among his closest friends was Hasselbaink, who remains in touch, and David Hopkin, then the Whites’ marquee signing.

“Bruno was a great guy,” recalled the Scot. “There were not a lot of foreign players at the time, so it must have been tough for him, but he tried his best and everybody appreciated that.”

Ribeiro’s output in two years at Elland Road was relatively impressive: 52 games, six goals, one on his home debut and the majority of them screamers. He also played 29 times in the 1997-98 season as Leeds finished fifth to qualify for Europe.

Graham described him as a player who made “very good decisions on the ball, a real steady hand”, and that, largely, is how he is remembered by Whites fans – as a dependable cog who rarely hit the heights of his early performances.

Perhaps that would have changed if Graham had remained in the dugout. Yet, just as luck had earned Ribeiro a move to Leeds, so it prompted his eventual departure.

Injured in the early stages of the 1998-99 season, his return coincided with the arrival of David O’Leary. Whether he was intent on blooding his “babies” or was simply unimpressed, he gave Ribeiro the cold shoulder and eventually flogged him to Sheffield United.

“It hurt to leave,” he admitted. “I loved the club, the atmosphere. It was amazing to play there and I’ll never forget it. But sometimes you need to think of your career.”

Within two years, Ribeiro was back at Setubal, where he would win a promotion, two cups and spend the remainder of a distinguished Primeira Liga career.

“Bruno is a very important player for us,” said Helio Sousa, who managed Ribeiro from 2005-07 before ceding to current Sheffield Wednesday boss Carlos Carvalhal. “He is calm and intelligent, a leader on the pitch. And he loves this club.”

And they loved him – so much so that, in 2011, he was invited to step up from managing the Under-18s to take charge of the first team.

In truth, it was an over-promotion. At odds with his board and struggling for results, Ribeiro was dismissed a year later and forced to rebuild in Portugal’s lower leagues.

Having returned in triumph to rescue Setubal from relegation in 2015, he then made another misjudgement.

Ludogorets boasted Champions League football but were also burdened with a board intent on controlling everything, from training schedules to signing players.

When he objected, Ribeiro was sacked and, after a stint back in Portugal, was offered a lifeline by Port Vale. Why?

A recommendation from Jose Mourinho greased the wheels, and Ribeiro makes no bones about his debt to the Special One.

As a teenager, Ribeiro was handed his debut by Mourinho Snr and remained friends with the family thereafter. He and Jose became close and, as a manager, says that “90 per cent of what I do” was taken from the Man United boss.

“I ask his opinion, always before deciding something important for my career,” he said. “We are in permanent contact, exchange many ideas. He is an extraordinary man, a person I trust completely. He’s the best coach in the world.”

Yet that remaining ten per cent is telling. Where Mourinho has favourites and outcasts, Ribeiro’s man-management style is about empathy and inclusion.

“I am very close to my players,” he has said. “I like to have individual conversations, clearly explain what I intend. I was a professional footballer for 18 years and I know very well what they feel in each situation and what they need to hear. I am always available.”

At Port Vale, he chose three captains to ease the foreign players in. Cliques were banned, discussion and openness encouraged. The effect has been galvanic.

“That is Bruno,” said Zequinha, part of the Setubal side Ribeiro inherited in 2015. “He made us understand the importance of the group. He gave us spirit and we used that to stay up.”

Playing Career: A winger or central midfielder, Ribeiro began his career at home town club Setubal, making his debut in 1994 and clocking up 41 appearances. In 1997, he joined Leeds for £500,000, scoring six goals in 52 games and helping the Whites to fifth in the Premier League. Sold to Sheffield United for £500,000 in 1999, he struggled to nail down a place and, after 30 games in two seasons – mostly from the bench – he returned to Portugal with Beira-Mar. In 2003, Ribeiro returned to Setubal, then playing in the second tier. Promotion was achieved in his first season and was followed by two cup triumphs as Setubal regularly pushed for Europe. Ribeiro eventually scored eight goals in 161 games for the Sadinos before retiring, aged 35, in 2010.He also won five caps for Portugal Under-21s.

Managerial Career: Named manager of Setubal in 2011, Ribeiro won just seven of his 27 matches and was sacked in 2012 with Setubal bottom of the Primeira Liga. He then had spells at Farense, Moura and Pinhalnovense, maintaining a win percentage above 50 per cent at all three. Ribeiro returned to Setubal in 2015 and saved the club from relegation, only to leave when his contract expired. A switch to Bulgarian champions Ludogorets proved less successful, lasting just seven matches before he was sacked following disagreements with the board. He then spent five matches at Portuguese side Académico de Viseu earlier this year, leaving when wages went unpaid. After a brief spell out of the game, Ribeiro joined Port Vale in June 2016.