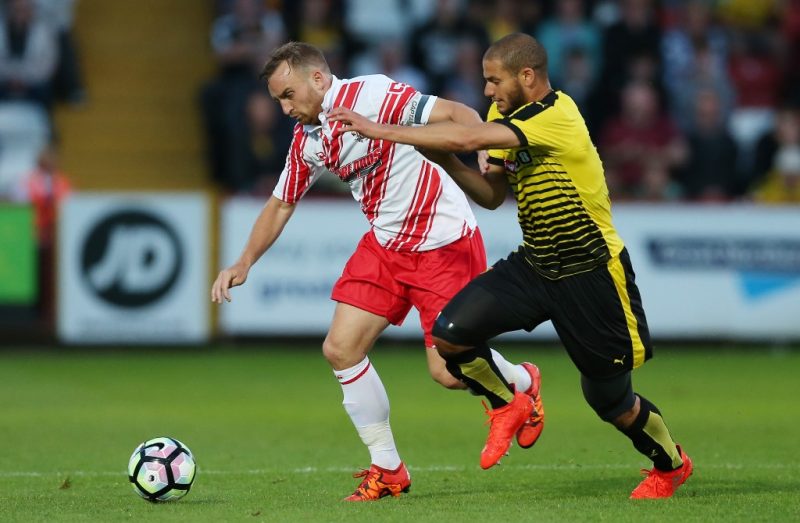 The captain, Ronnie Henry. I don’t really like him, but I get on with him the best of anyone. Sorry, Ronnie!

Steven Schumacher would be the tightest in our dressing room. I reckon he uses some of the money out of the boys’ fine jar and pays some of his rent out of it. He’s as tight as anything, so he certainly won’t be volunteering to do the dinner.

Andrew Fox has never worn a T-shirt that fits. They’re always way too big for him. Not only that, he wears shoes that could walk on their own without him in them. They’re that old and scruffy they don’t need any feet in them to move!

Unfortunately, we have only one DJ in the dressing room and that’s fitness coach Craig Smith. But the music is terrible, the same playlist every day and we can’t change it. It’s the worst house music you’ve ever heard. It’s so repetitive.

We’re quite good as a club, but if there’s anyone who’s late it’s Jobi McAnuff. He doesn’t live that far away and always blames the traffic. We get fined for that and for leaving rubbish around, bits and pieces like sloppiness around the training ground, but nothing too hefty.

A few of the guys would probably say me! But I reckon it’s Ronnie Henry, even though goalkeeper Chris Day wants to be the closest. He’s desperate! The manager always takes the mickey out of me, which the lads think is a love-hate relationship, but I don’t quite see it! With Ron being the skipper I suppose it has to be him.

Dale Gorman loves a dance. He doesn’t always look good doing it, but he’s got some moves, bless him. He’s one of those shufflers, but he does bring it out every chance he gets. He needs to change it up a bit.

Most likely to disgrace themselves at Christmas party?

Without hesitation, it’s Ben Kennedy. I don’t think he has ever made it beyond 10pm on a night out, but he’s only 19 and not a great drinker, so we normally tuck him up in bed early. There’s nothing hugely outrageous he’s done, yet, but you can tell he’s not a regular drinker. He struggles when he lets his hair down.

Ronnie Henry has an absolute shocker, a black panther on his calf. Nobody knows why, not even Ronnie, but he got it when he was 17 or 18. It’s not a good pouncing panther!

Jake Hyde absolutely loves himself, but Petty (Tom Pett) came in burnt not long ago, and claimed he’d been lying in the garden. The problem was it was raining that day so he must have had a sunbed.

Ronnie and I are both earning our coaching badges, but in my humble opinion I’m better than him. There’s no way we’ll ever be joint managers, though! I’d love to go into coaching, so it’s nice to be doing my badges now.