Home / Features / Columnists / Dunlavy column: McClaren is back with an altogether different beast to tackle

Dunlavy column: McClaren is back with an altogether different beast to tackle 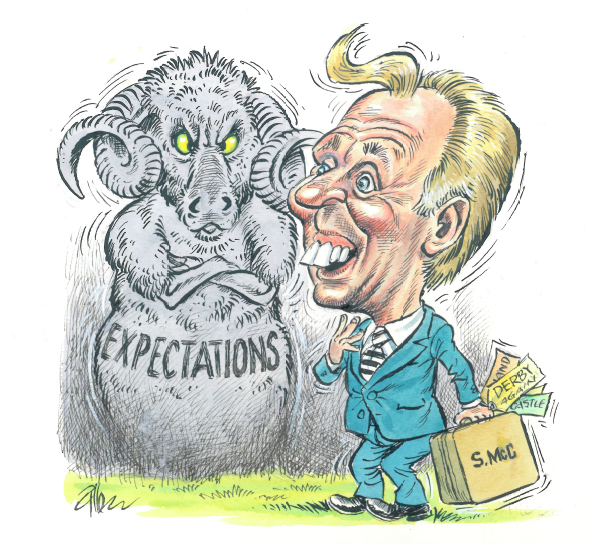 WELL, who saw that coming? Tin Tin is back in town – and Derby fans must be wondering what the blistering barnacles is going on.

It is 17 months since Steve McClaren messed up promotion amid a damaging dalliance with Newcastle.

Top of the Championship when Fat Mike first whispered sweet nothings, the Rams collapsed like drunken spaghetti, finally reeling over the line two places outside the play-offs.

On his arrival in 2013, McClaren had transformed a mid-table thrash into a genuine shot at the Premier League.

On his departure, he’d engineered the complete opposite.

Along the way, he’d squandered the trust of fans, irritated his employers and turned an entertaining, attacking team into a leaky, shapeless mess. Progress it was not.

True, Derby have struggled for fluidity and form since his departure.

Turgid under Paul Clement, fragile under Darren Wassall, toothless and tortured under Nigel Pearson, you can understand chairman Mel Morris craving the pace and panache of McClaren’s glory days.

On top and on form, the Rams were one of the most attractive sides in the division.

In 2012-13, not even a Jamie Vardy-fuelled Leicester could match their tally of 86 goals.

Morris isn’t the only one going all misty-eyed at the memories. When McClaren was clocked in a local pub with CEO Sam Rush on Tuesday night, social media lit up with Rams fans willing to bury the hatchet.

“Steve’s time at Derby came to a premature end and I know he regrets that greatly,” said Rush on Wednesday.

“He values hugely his relationship with our supporters and I know he will work very hard to ensure the special connection returns.”

That, though, is easier said than done. However realistic and logical, all supporters struggle to temper expectations.

Newcastle fans knew perfectly well that Kevin Keegan was taking over a mess in 2008, yet none could suppress the fizz of excitement, the pipe dream that the glories of ‘96 could be rekindled.

If the 55-year-old gets the goals flowing straight off the bat, happy days. That calamitous collapse will be swiftly forgotten.

But the Derby he inherits is not the one he left.

Scarred by failure, saddled with a sense of underachievement, a squad jumbled with the foot soldiers of two failed revolutions.

What Derby needed this summer was a mass clearout. Morris knew it. Nigel Pearson knew it. This season’s struggles have confirmed it.

Unfortunately, Derby couldn’t afford it. Having spent north of £50m over the last two seasons on an ultimately fruitless bid to reach the Premier League, another splurge was out of the question.

Pearson accepted the job furnished with this knowledge, yet his creeping dismay at his box of shoddy tools convinced him a rethink was required.

Morris disagreed and the resulting bust-up now sees McClaren back in charge.

Morris spoke glowingly of McClaren’s qualities at a conference on Tuesday night. The pair share a genuine bond and, as a coach, the former England boss has a fine reputation.

Yet this remains a marriage of convenience. Derby are stuck with their players, however flawed and fragile. Re-appointing the only man who has ever licked them into shape is an act of expedience.

Sensible? Yes. Logical? Absolutely. But no returning manager – especially one who departed in such murky circumstances – has ever received the patience and understanding he enjoyed first time round.

McClaren himself knows all too well the perils of revisiting past glories.

His return to Twente in 2012 ended just 12 months later amid increasing antipathy from the stands.

Right now, supporters remember the good times. If he fails to get the bandwagon rolling, the mood will soon be darker than Captain Haddock’s 5 o’clock shadow. McClaren has a very tough task on his hands.