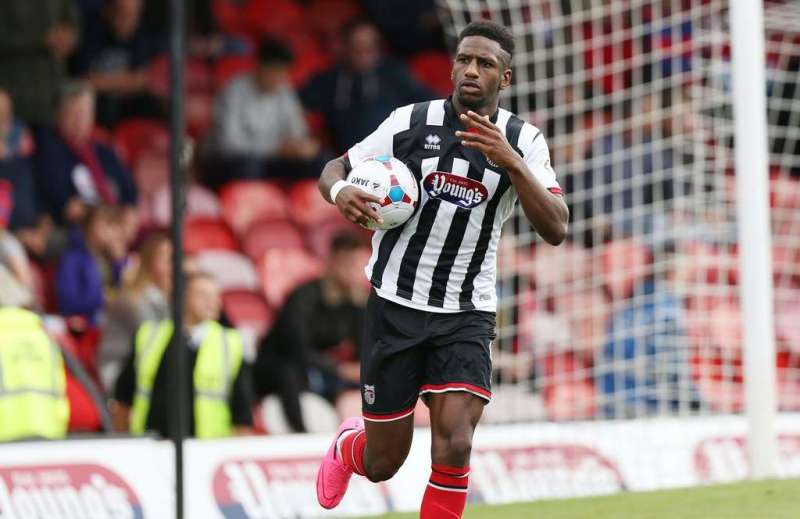 OMAR BOGLE spent much of his youth chasing the dream at some of the biggest clubs in Britain – before a dose of reality helped turn him into League Two’s hottest hitman.

Bogle, still only 23, was part of the academies at West Bromwich Albion, Birmingham City and Celtic, but it was three years in Non-League that gave him the best preparation to succeed on the big stage.

The Birmingham boy was picked up by the Baggies in 2007, aged 14, before joining the Blues two years later.

Aged 17, Bogle made the trip north to join Celtic, but left just a year later after realising his hopes of progression at the club were limited.

He moved back to the Midlands in 2012, signing for Hinckley United and scoring three goals in a brief eight-game spell, before he was snapped up by Solihull Moors of the Conference North – as it was then known.

In his three years under the guidance of former QPR defender Marcus Bignot, Bogle top-scored for his new club with 15, 18 and 29 goals respectively.

Bignot could not keep hold of his star man forever and Grimsby fought off competition from a host of Football League clubs to sign a 22-year-old Bogle with the world at his feet last year.

“It’s been a good few years for me,” he said, understatedly.

Since joining the Mariners, he has helped them back into the Football League and is now a hot property in League Two, scoring nine goals from his opening 12 league games.

“When I left Celtic, it was because I wasn’t going to get anywhere near the first team,” he added.

“I came back down and I went on a few trials here and there, which never really came to anything, but then I had a manager at Solihull, in Marcus (Bignot), who showed his faith in me and put his trust in me. He took a chance on me, really, as a young player.

“He made me the main player in the team when I was just 18, and from there I’ve just kept going.

“Even when I stepped down, I was still aiming to work my way up into the professional game and into the Football League.

“That has always been my objective, to get back to where I knew I could be. I want to play at the top, the highest level, so it was about going there, playing games and showing everybody what I could do, again.

“I hadn’t played for a while, and in football people forget about you quite quickly, so I had to make a name for myself in Non-League and score goals.”

Grimsby are so far not just surviving but thriving in League Two. Bogle’s goals have fired them into mid-table and within spitting distance of the play-off places.

He would certainly not turn back the clock on his career so far and points out that Burnley’s Andre Gray, not to mention a certain striker at Leicester, has won him new-found respect.

“They are opening the doors for other Non-League players,” he added. “I feel like the academy system now doesn’t teach you real football. When you’re playing Non-League, it is real competitive football.

“You learn to get hit by players. You’re battered and bruised and playing on pitches that aren’t the best, but they test your first touch and technical ability.

“It is real football and it is a good education for players.

“The academy system can be a bit false. The football they play does not prepare players as much for real men’s football, but the academies can be a good thing. Good players do come from there, but going the old-fashioned way is also just as good now, if not better.”