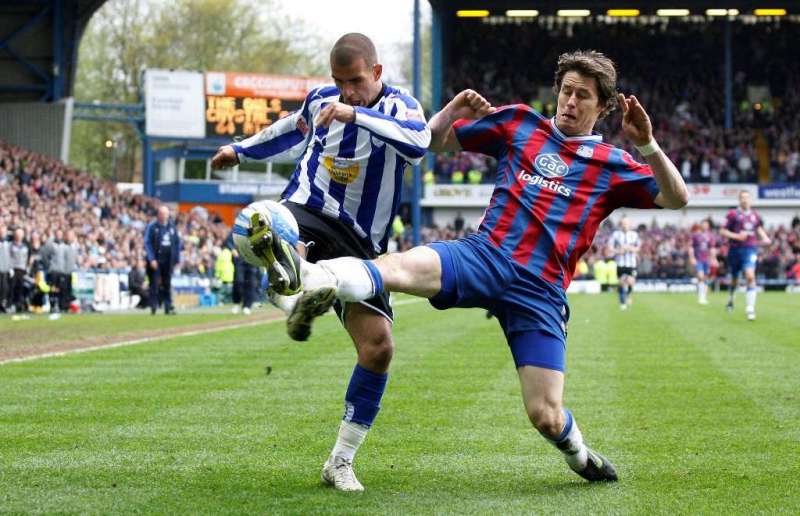 PADDY McCarthy was just 16 when he left his family behind at Dublin airport, armed only with a suitcase and dreams of a career at Manchester City.

It never happened, yet 17 years later the big centre-half has won a promotion to the Premier League, captained Crystal Palace and Leicester City and played more than 250 Championship games.

He also suffered an injury he feared might leave him unable to walk, but, thankfully, the 33-year-old – now retired and coaching at Selhurst Park – recovered to tell us the tale.

Man City. I moved over from Ireland when I was 16. I’d been playing for the Dublin representative team and, from that, was picked for Ireland schoolboys.

Scouts came to the games and I went back and forth to a few different clubs – City, Arsenal, Nottingham Forest, Tranmere, West Ham. A couple offered contracts, but I got a great feel for City. I also knew a few other Irish lads, like Glenn Whelan and Willo Flood, were moving over so it would make it easier to settle in.

Even so, it was a bit of a shock. I actually signed when I was 14 or 15 but put it to the back of my mind and got on with everyday life. It seemed to creep up on me and, next thing, I was standing at the airport with my bags packed waving goodbye to my family.

It was tough at first, moving into digs and looking after myself. Nobody would find that easy at 16 and I did miss home. It was sink or swim but, looking back, it’s something I glad I went through. It made me fend for myself.

This is a tough question. It’s close between Dougie Freedman, who I really enjoyed working with at Crystal Palace, and Tony Pulis.

Dougie had been in coaching only a year or two, but he took to it like a duck to water. I was his captain and we had a really good relationship.

But, in terms of experience and what he achieved, it’s got to be Tony. He dragged Palace from being a Championship club struggling to tread water into an established Premier League team. He changed everything, from tactics to mindset. He also kept a squad of 25 people happy and made everyone buy into his methods.

Mile Jedinak definitely wasn’t the best ability-wise. But, in terms of all-round influence on and off the pitch, my old Crystal Palace team-mate has no equal.

He came from Turkey and just had such a professional way about him. Everything he did was spot on and those standards became contagious.

He was someone who made it a pleasure to go to work because you knew that, every day, he was trying to improve. He was also built like a caveman and a ferocious competitor. Nobody enjoyed playing against him. Give me 11 Mile Jedinaks any day of the week.

The first and only was with Palace in 2013, when we beat Watford in the play-off final. Unfortunately, that entire season I was ravaged by a serious injury, so I didn’t get to play in it.

Other than that, I’ve spent most of my career putting out fires. Every club I sign for seems to go into administration two months later, but they never tell you about that in the meetings!

Danny Butterfield, who I was with at Palace. He was always trying to play pranks on people. I roomed with him quite a bit, so I was especially vulnerable!

Everybody laughed when Danny was around and I’m sure, if you speak to any of his former team-mates, they’ll attest to that.

The most printable one would have to be Ian Holloway after the play-off semi-final victory at Brighton. He was giving his post-match team talk and, right in the middle, Aaron Wilbraham pressed the button on the radio.

Dance music blared out and we all thought ‘How’s he going to react?’ But he just stopped, looked at the radio, and burst into this mad dance. Everyone just fell about and, even now, I’m still in stitches watching the video on YouTube.

Nobody knew he had that in his locker, but he’s got some shapes on him has Ollie. I reckon he must have done a bit of damage in night clubs when he was younger!

Being given the captain’s armband at Leicester at 22. I remember it had been passed around a bit and nobody had really grabbed it with both hands.

We played against Tottenham in the FA Cup at the Walkers, live on TV on a Sunday evening. A full house.

To be honest, I was a young kid who’d just established myself in the team but, just before kick-off, the manager, Craig Levein, pulled me over. He said ‘Listen, you’ve become a leader of this group. I want you to be my captain’.

I led the team out against a team packed full of stars. Robbie Keane and Jermain Defoe played up front that night. But we ended up winning the game and I stayed captain until I left for Charlton in 2007.

Overall, I managed to play over 300 professional games. For somebody from a council estate in Dublin, that’s a big achievement.

My first bad injury, which wiped out the promotion season with Palace. I had something called osteitis pubis, which is basically degeneration of the pubic bone.

I was getting injections every two months, just to keep me out on the pitch. I had one too many and got a really bad reaction. The surgeons didn’t understand what was happening and it was touch and go whether I’d even be able to run around the back garden with the kids.

I was really struggling at that point. The lads were flying, I couldn’t get fit and nobody could give me any answers.

I was getting really down on myself when I got a call from a good friend of mine, Shaun Derry. He’d noticed I sounded a bit down.

I said ‘Dez, I’m low as a snake’s belly, pal. I think I might be depressed’. He said ‘Shut your mouth, I don’t let my mates get depressed. I’ll be round in five minutes and we’ll go for a coffee’.

When I said I was on crutches, he said ‘I don’t care if I have to carry you out, you’re not sitting there feeling sorry for yourself’.

I’m sure it was a little thing to him, but it meant a lot to me at the time. Football gets a bad press sometimes, but I’ve met some fantastic people along the way. He was great with me around that time, as were a lot of people around the club.

When Luton got promoted into the Championship under Mike Newell, Kenilworth Road was hard work.

They had big Stevie Howard up front and used to boom it forward every chance they got. The players were in your face, the fans close enough to hear every word.

It was difficult but, at the same time, I actually loved the challenge. I like standing up to a physical battle, and me and Stevie had plenty of those.

I’ve actually met him since on holiday and we had a right laugh about the times we used to smash each other to pieces. It’s great to have lads like that. People you could kick all over the park for 90 minutes, then shake hands and have a beer afterwards. 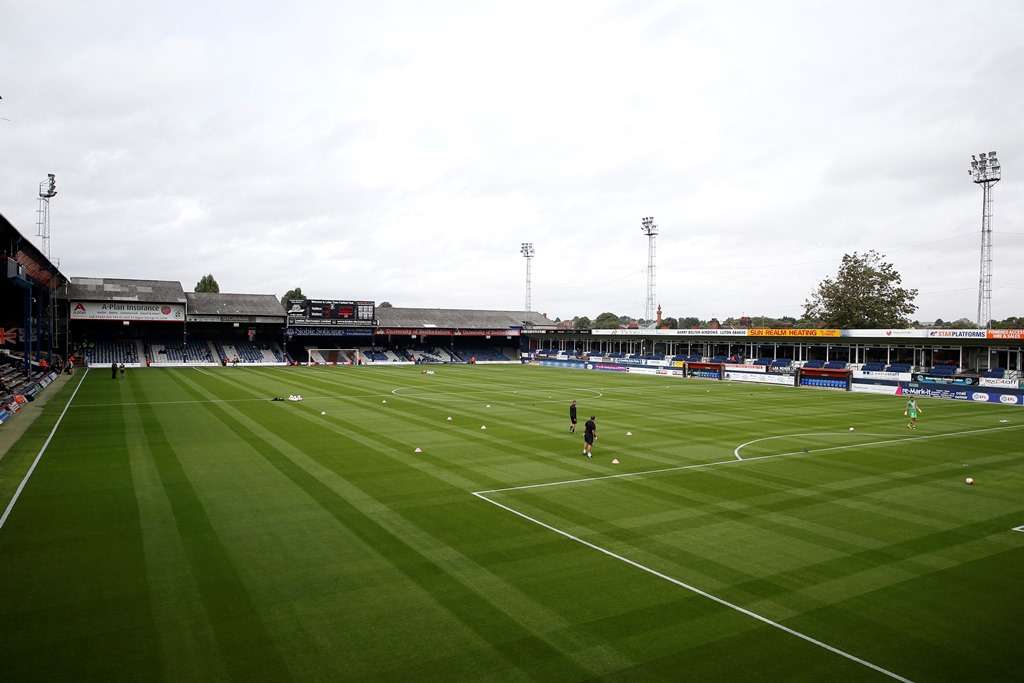 I played against Robbie Keane that night at Spurs and it was during the hot period when he was banging in goals left, right and centre.

He was one of those players whose all-round game was so good that you couldn’t find a weakness. If you got too tight, he’d spin behind you and had the turn of pace over three yards to get away.

But, if you didn’t get close enough, he had the technique to smash one in the top corner from 25 yards. You had to be alert for 90 minutes flat and he was a tough opponent for better players than me.

Old Trafford. I was a Liverpool fan growing up, so I always liked playing against them. The best was when Palace beat them in the quarter-final of the Carling Cup.

That was a great night and the noise was incredible. I’m not a fan of these new stadiums. They just don’t have the heart and soul of somewhere like Old Trafford. You walk in there and feel the history.

I’ve just completed my A Licence and I’ve got a few youth modules I’m looking to do. I just want to stay in the game.

I’m coaching Palace’s Under-16s at the minute, which is a great start for me and something I’m really enjoying.  It’s a club that been part of my life for eight years and it’s unrecognisable from when I joined.

I’m eager to learn, eager to help them keep growing. It’s a club that’s going in the right direction and long may it continue.