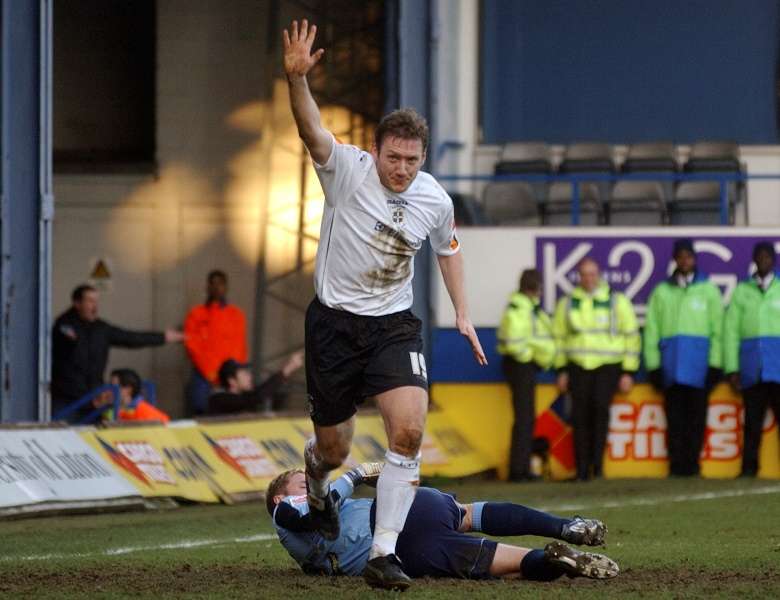 AS a teenager, Steve Howard helped to build houses for a living. Now 39 and a successful property developer, he owns more than 400 of them. And in between?

Well, there were five promotions, 209 goals, 781 games, legendary status at the likes of Leicester, Luton and Hartlepool and even a goal at Old Trafford.

Here, the big striker recalls how Hartlepool helped him ditch his shovel and pick, a baptism of fire at Highbury, a legendary prankster at Kenilworth Road – and the day Mike Newell’s clobber went up in smoke.

Hartlepool. I’d been at Sunderland on a YTS, got released, then went to play for Tow Law in the Northern League. Hartlepool saw me in a game and asked me to come for a trial. A few weeks later they asked me to join and that’s how I became a footballer.

It was a bit of a comedown actually. I was working as a roofer and a labourer, making a good few quid. Then, I signed for Hartlepool and was getting next to nowt! I thought ‘What the hell have I done here?’

It was probably for the best, though. I remember going into work and one of the blokes there said ‘It’s a good job you’re going to be a footballer because you’re no good with that shovel’.

I made my debut almost straight away, and in my fourth game we had Arsenal in the League Cup. In the space of a few weeks, I went from playing in front of 400 people at Tow Law to 40,000 at Highbury and marking Ray Parlour. Then, he went off and Paul Merson came on.

It was Dennis Bergkamp’s first season, and in the second leg at our place everybody was singing ‘What a waste of money’. He turned out to be decent value in fairness.

I’ve had a few. Mick Harford at Luton taught me how to play football properly. His phrase was ‘Get them wings out’.

But the best was Billy Davies at Derby. He got me into the Premier League and was probably the best man-manager I’ve ever known. Even if you ask the lads who didn’t play under him, they’ll all sing Billy’s praises. He kept people sweet, knew which buttons to press.

It doesn’t matter what line of business you’re in. If you’ve got 20 staff with their own personal ambitions, you’ve got to keep them happy and Billy was a master at that.

Seth Johnson, who is also my best mate. Never gave the ball away, loved a tackle. The kind of nasty, aggressive player you love to have on your side.

It’s such a shame he had to retire at 28. We were playing in the play-off final at Wembley and he went in for a tackle ten minutes from the end. Seth had bad knees anyway and one just gave way.

The doctor basically turned round and said ‘Look, if you don’t retire, you won’t be able to walk in ten years’. That was it and it’s heartbreaking to talk about football with him because he still loves it.

Everybody talks about that transfer to Leeds and the story in Alex Ferguson’s book about him demanding all sorts and Ridsdale offering £40,000. But it’s total b******s. He wasn’t like that all.

With Northampton when I was about 21. League Two to League One, under Ian Atkins. We finished third but we walked it really. My mate Lee Howey, brother of Newcastle’s Steve, was at the back and we had a good team that gelled.

Kevin Nicholls by a long shot. He was my skipper at Luton. He played prank after prank and I actually used to get in early just to see if he was up to something.

Everything he did was hilarious and all the young lads used to look at him and think ‘Bloody hell, is this really what a captain is supposed to be like?’

But I think that’s why we had so much success. All of our managers – Mike Newell, Joe Kinnear, Mick Harford – basically said to him ‘Kev, sort the lads out for me’. They knew he brought everyone together.

It has to be Kevin. I can’t remember the year, but Mike Newell was our manager and it was fireworks night.

We were training but I was injured at the time. I’d gone to Newelly’s office to have a chat about some stuff and we got a knock on the door. One of the lads said ‘Gaffer, Kev’s got a big box of fireworks, do you want to watch?’

We went out to the stand and Kev’s down on the pitch at Kenilworth Road setting off all these fireworks. Then, all of a sudden, we saw him wrapping all these clothes round this huge rocket.

Next thing, there’s a massive bang, with boxers, jeans, all sorts raining from the sky in flames. Brilliant. 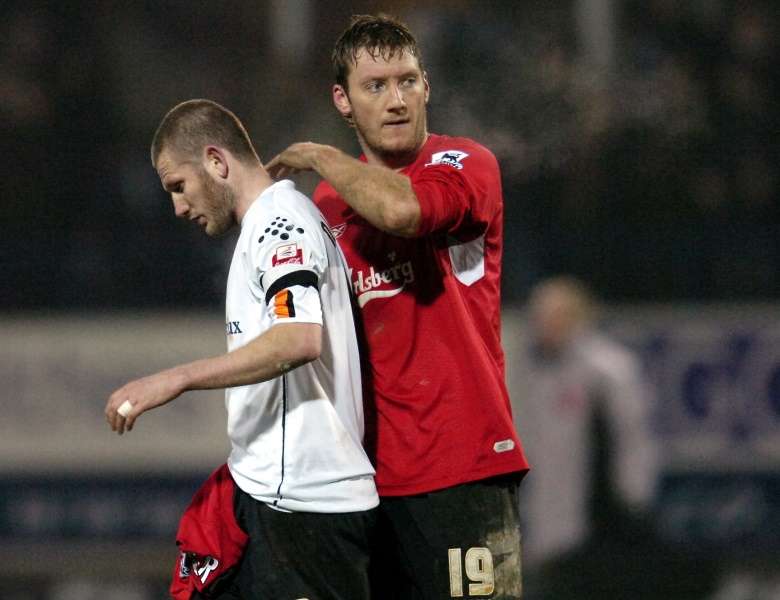 Promotion to the Premier League with Derby in 2007. I was thinking ‘I was at Tow Law ten years ago and now I’m in the promised land’.

I’d spent a lot of years in the Championship and watched so many people I knew go up. Finally, it was me. It was bloody hard, though. We probably got promoted too soon and, after a decent start, we started getting heavily beaten. Once the confidence went, we were knackered.

I never got there again, but I got close with Leicester in 2010. We made the play-offs and lost to Cardiff in the semis when Yann Kermorgant chipped that infamous penalty in the shoot-out.

The irony was,Yann had the hardest shot I’ve ever seen. He used to take penalties in training and lash them. Then, at the biggest moment, he did that. Bizarre.

Relegation from the Championship with Leicester in 2008. At the time, it felt like the worst thing that could have happened but, in retrospect, it was probably the best.

The whole club was full of dead wood and there was this attitude of ‘We’re too good to go down’. I joined three-quarters of the way through the season and thought ‘This club is a dying animal, it needs to be put down and resurrected’.

That’s what happened in the end. We won League One, then got to the play-offs the following year. Then came the new owners. Now, they’re top of the Premier League and, personally, I think it can all be traced back to that moment.

Stoke under Tony Pulis. The way they played football was horrendous. You’d be sitting in the bus after the game and it felt like you’d been in a fight.

It was long ball, beat people up, bully and brawl. I gave as good as I got, but I still ended up black and blue. I used to look at some of the more technical players in our team and just think ‘Oh dear, you’re going to get hurt today’.

John Terry. When I was in the Premier League, he was in his heyday. Everybody knows how great a player he is, but the thing that made him special was that he was a tough bugger along with it.

As soon as you took to the pitch, he was the most focused man alive. His concentration was unbreakable and he’d do anything to win. Even someone like Nemanja Vidic was nowhere near Terry. When we played United, I used to look at Vidic and think ‘I’ll have a bit of you, no problem’. When we played Chelsea, it was ‘Oh no, not Terry’. He didn’t have a weakness.

I loved White Hart Lane. Old ground, crowd on top of you, great atmosphere. But the most special was St James’ Park, Newcastle.

I’m black and white daft. So are my whole family. I had a season ticket when I was a kid and I used to get the bus from Chester-le-Street to go to the match every other Saturday. To actually set foot on the pitch there was very special.

I’m on a mission to sort out the future of as many footballers as I can.

I saw a statistic the other day that three out of every five go bankrupt within five years of leaving the game. When you think of how much they earn, that’s crazy.

I’ve invested in property since I was 19-20, and now I’m working with the PFA to get among current players, give them a bit of education and help them build up a property portfolio.