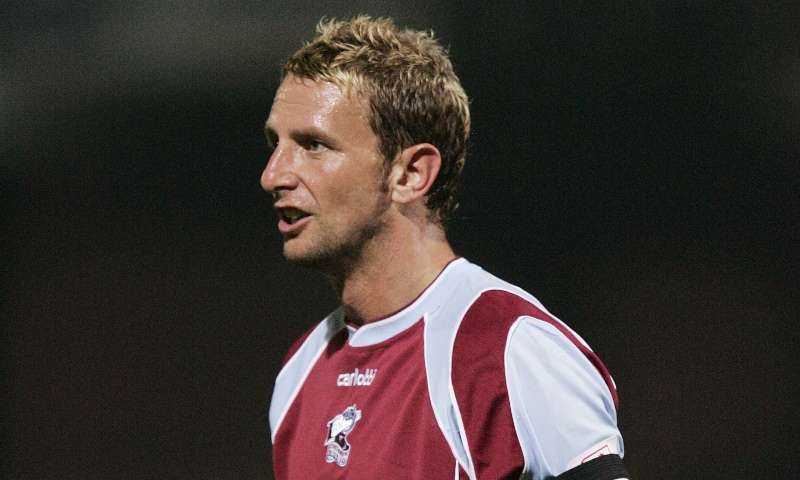 AS a young striker at Leicester City, Ian Baraclough was painfully aware he didn’t have the tools for a career as a fox in the box.

Luckily, so did Alan Buckley, the manager who signed him for Grimsby in 1991 and converted him into a midfielder.

Baraclough revelled in his new role, carving out a near 20-year career with the likes of Lincoln City, Mansfield, Notts County, QPR and Scunthorpe, the club where he won three of his four promotions.

Since then, he has managed Scunny, Sligo Rovers – where he clinched the club’s first League of Ireland title in 35 years – and Motherwell.

Now 45, the Leicestershire lad looks back on those early years at Filbert Street, a glorious season at Meadow Lane – and the day Sam Allardyce gave everyone the trots!

Leicester City. I played for the county against their youth team when I was 15. We actually got beat about 7-1, but for some reason they picked me out. I came through the system under David Pleat with guys like Richard Smith, Des Lyttle and Scott Oakes. I was a striker in those days, alongside Paul Kitson.

He played a lot more than me. I managed only a couple of appearances and quickly realised I wasn’t destined to be a forward at the highest level.

I actually got offered a new deal when Brian Little came in, but with all the strikers in front of me it was clear I wasn’t going to play. I’d been on loan to Grimsby and eventually signed for them. It was Alan Buckley who first put me in midfield.

Very tough. David Pleat was instrumental in my development, very positive and encouraging towards young players. The late Andy King at Mansfield for pure enthusiasm and man- management. Ray Harford was also top-class.

And, of course, Sam Allardyce, my manager when we went on that famous run with Notts County and won promotion.

Sam was at the forefront of sports science. I’ll always remember when he first introduced us to Creatine, the muscle-building supplement. The club was skint, so it wasn’t provided, but we were ‘urged’ to buy some.

Nobody gave us any instructions – all we knew was that we had to load up. What nobody realised was that too much gave you the runs. That first game, we raced off the pitch at half-time and there was a queue for the toilets!

Gary McAllister. He was only a young lad at Leicester, but even then you could see he was a quality midfielder. Left foot, right foot, strikes on goal, set pieces, his technique was immaculate and he had enormous energy. Even though he won the title with Leeds, it probably took that move to Liverpool, at 35, for people to realise how good he was. An incredible player who I always felt wasn’t given the credit he was due.

I was at Grimsby in ‘91 but I was only a kid and hardly played, so I’m not counting that one. My first proper promotion was from Division Three with Notts County under Sam in 1997-98.

We got 99 points and, at one stage, won ten games on the spin. We eventually won the title by 17 points and became the first team in post-war history to win promotion in March.

Sadly, I didn’t get to enjoy the celebrations. It was the first year of Bosmans and my contract was about to expire. I’d already agreed a move to QPR – which caused some fun and games with Sam – and was all set to go for nothing in the summer.

Then, the club rang me on the old deadline day in March and said: ‘Look, if you go now, they’ve agreed to give us some money for you’. That was it.

Aidy Boothroyd was great. People may not think that, given his persona as a manager but, as a player, he was great value. He was mouthy, he didn’t care who he upset or what he said. And he could be savage with it.

Mike Pollitt was another one, a classic daft goalkeeper. He was probably the best No.3 ‘keeper in the business. He made a career out of it!

He was a Bolton lad, with that Peter Kay delivery. And he’d do stupid things. He had this dog called Ralph and he’d pretend he was Ralph, bounding around and licking people. He was crazy and got on your nerves, but great to have around.

We had a really experienced centre-half at Notts County called Gary Strodder. And, whether it was nerves or just from drinking too much water, he could not start a game without having a wee.

More often than not, it would happen on the pitch just before kick-off. I didn’t realise this until mid-way through the season. I can’t remember the game, but I was going round, shaking hands and geeing people up. When I got to Gary, I felt this wet patch and said ‘What the hell is that?’

Straight as an arrow, he just said ‘Yeah, sorry about that Ian, I’ve p****d myself. I do it every game.’ I couldn’t stop laughing at the time and it still makes me chuckle. 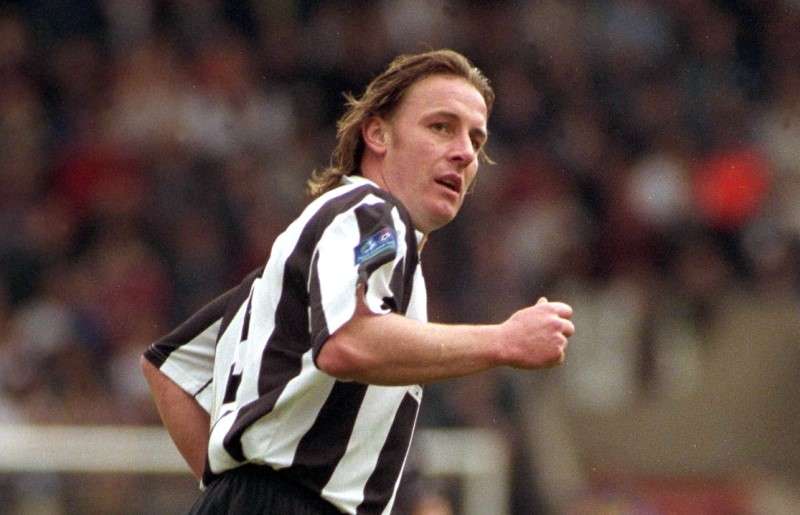 Funniest incident: The nerves would get to team-mate Gary Strodder by getting to his bladder (photo by Tony Henshaw / Action Images)

Playing until I was 38 was something I never envisaged when I started out. People always say ‘Play as long as you can’ and I managed more than 700 games, so I certainly did.

I did look after myself but it wasn’t as if we were like nuns. I had a drink, I went out, I enjoyed myself. People are certainly a lot more professional these days. I was just lucky that I never picked up any serious injuries.

It’s more a regret than a moment but I never did get to test myself at the highest level. There were whispers that it might happen from time to time, but nothing came off. It’s a shame, but I’m comfortable in the knowledge that I wasn’t quite good enough.

I also had three sackings as a manager, with Scunthorpe, Sligo and then Motherwell.

It isn’t a nice feeling. You feel hard done by and it’s very difficult for the people around you.

But you can’t take it too personally. It’s the life of a manager now and it’s getting worse. Just look at Sean O’Driscoll. He got only 16 games at Walsall. What was he expected to do in that time?

We had a pre-season tour to Ayia Napa. Playing in that heat in July, having gone out for a few drinks the night before, that wasn’t at all pleasant.

But the hardest was probably Spartak Trnava, a Slovakian team we played in the Europa League when I was managing Sligo. The heat, the atmosphere, the logistics of getting there. It was about a six-hour journey in total, on planes, trains and automobiles.

Dennis Bergkamp. I was at QPR when we played Arsenal in the FA Cup – it was probably about 2001. I’d loved Arsenal as a boy and I was thinking ‘This is the biggest day of my career’. In the end, it turned out to be one of the worst.

They had Vieira, Wiltord, Henry. They all ran amok that day, but nobody was as impressive as Bergkamp. Right foot, left foot, sublime balance. You had no idea which way he was going to go. He could turn on a sixpence. His awareness of others was frightening, his weight of pass was perfect.

And that was just his set-up play. His finishing and movement were deadly as well.

He scored one and had a hand in five more as we lost 6-0.

Looking back now, it was a pleasure just to be on the same pitch as someone like that. At the time, though, I wished I wasn’t. 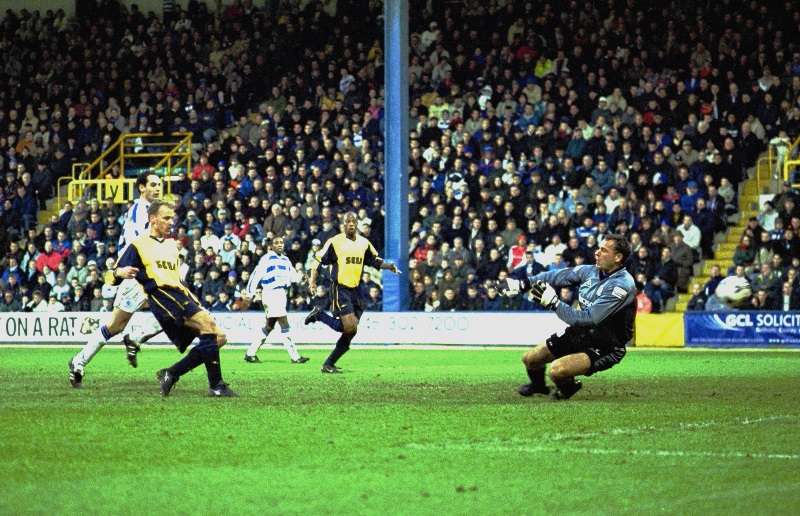 I really enjoyed Goodison Park. Like Loftus Road, it’s an old ground where the stands are very close to the pitch and it makes for a great atmosphere. A real cauldron.

It was the same with Maine Road, Man City’s old ground. I played there for QPR the day Jamie Pollock scored that famous own goal.

Before the kick-off, Vinnie Jones and Razor Ruddock had threatened Georgi Kinkladze in the tunnel. It didn’t work – he scored after about 50 seconds. But then we equalised and Jamie put us ahead with that crazy goal. It was hilarious but, at the time, just a huge relief. The 2-2 draw we got that day effectively kept us up and sent them down.

Just to stay involved in the game. When I retire, I want it to be my choice. I love coaching, trying to improve players. I love everything about the football environment, which is why I played for so long.

I’m scouting for Darren Ferguson at Doncaster now, while actively looking for a full-time role in the game. Coaching, management – I don’t care. As long as I can work with players day in, day out, that’s what gives me the buzz.