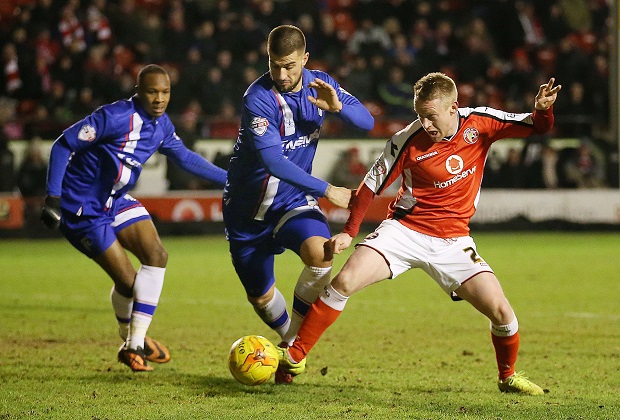 WITH three wins from his first three games, Justin Edinburgh appears to have won over the Gillingham dressing room in double-quick time.

Mind you, that should come as no surprise –most of them voted for the former Spurs full-back to be the new manager!

After Peter Taylor was dismissed on New Year’s Eve, Gills chairman Paul Scally asked every player, coach and youth-teamer at Priestfield to name their preferred candidate.

Edinburgh came top, and within weeks the man who led Newport into the Football League was on his way to Kent.

“It was all the chairman’s idea,” said Max Ehmer, the Gills defender on loan from QPR. “He basically gave us a bit of paper and told us to write down who we thought was the best candidate to be our new manager.

“It wasn’t from a shortlist or anything like that –just literally whoever you wanted to write. It wasn’t just the players either. Everyone at the club, from the Under-21s through to the coaching staff was asked for their selection.

“It was nice to be asked and, from what I gather, Justin Edinburgh had a lot of support so I guess the chairman took it on board.”

Taylor was sacked with the Gills 20th in League One and when the caretaker-management team of Andy Hessenthaler, Steve Lovell, Darren Hare and Mark Patterson oversaw three straight defeats, it appeared a foolhardy decision.

However, the makeshift management team swiftly steadied the ship with a five-game unbeaten run and a trio of victories under Edinburgh – including an impressive 4-2 beating of title-chasing MK Dons –has lifted Gillingham to within five points of a play-off berth.

“The gaffer hasn’t changed a lot really,” said Ehmer. “He knew we were going well when he arrived so I think it was a case of ‘keep it up and I’ll be happy’.

“We’ve got 16 points out of the last 18 so we’re going really well right now. Last month it was looking like a relegation battle. Now we’re aiming for the play-offs. That’s how this league works and we’re bouncing now.”

Edinburgh played with strike legend Jurgen Klinsmann at White Hart Lane and if the 45-year-old picked up any German, he’ll find a willing listener in Ehmer.

The 23-year-old was born in the Fatherland to German parents but moved to London when he was five years old and now considers himself British.

However, he still speaks German and would even turn his back on the Three Lions if it came to the crunch.

“My dad’s retired now but he was a banker,” says Ehmer. “We moved over when I was five so I’ve virtually lived here all my life.

“Even so, I can speak German fluently. My whole family are from a town near Stuttgart, about 30 miles from the German border. I go back most summers to see everyone.

“I feel English but, if it ever came down to it, I’d choose to play for Germany over England. With all those connections I feel like I’d have to.”