Home / Featured / Noel Hunt so happy with his Ipswich switch!

Noel Hunt so happy with his Ipswich switch!

Posted on February 6, 2015 by admin in Featured, Skybet Championship | 0 Comments 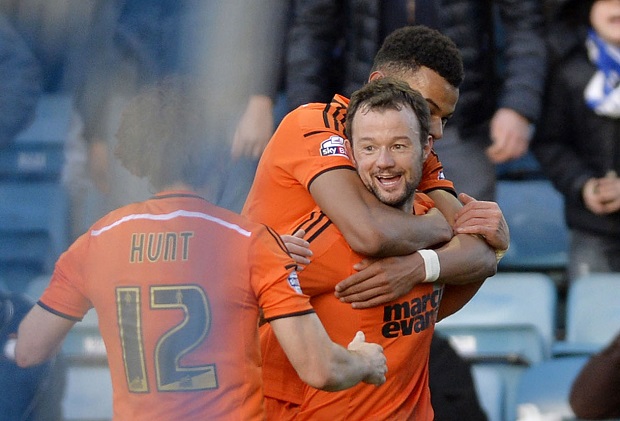 STRIKER Noel Hunt believes leaving ‘tormented’ Leeds for tranquil Ipswich has been one of the best decisions of his career.

The Irishman was initially on loan with the Tractor Boys from Leeds at the end of 2014, before his contract at Elland Road was terminated.

And the 32-year-old, who has linked up with brother Stephen at Portman Road, was happy to escape the seemingly perennial madness in the Pennines for the serenity of Suffolk.

“Leeds and Ipswich operate in totally different environments,” explained Hunt. “Leeds are a tormented club, the Football League has come down hard on them and their owner and they tend to be in the press for all the wrong reasons. And the fans have suffered for it.

“But Ipswich has a calmness about it, and that’s the way it should be. You never hear from the owner and it’s nice to have a bit of tranquillity. There’s no-one on edge, everyone knows the plan.

“At Leeds there were a few different owners, then Massimo Cellino came in and changed things, got rid of the manager, you were never too sure where you were.

“Things didn’t work out at Leeds and it was time to part ways. I think I was more than fair in what I did, and the move was about my career. It’s nice to be involved more at Ipswich, because all I’ve wanted to do is play football and we’ve got a great team here.”

Of course, leaving Leeds for Ipswich means Hunt has left behind a side at the wrong end of the table for one fighting for promotion to the Premier League – on a shoestring.

When Ipswich boss Mick McCarthy splashed out £100,000 to buy striker Freddie Sears from Colchester in mid-January it saw the overall outlay on his entire squad increase ten-fold.

For only left-back Tyrone Mings – a £10,000 signing from Chippenham Town, who is now being monitored by a host of Premier League clubs – had previously commanded a transfer fee for his signature.

“I think the key thing is everyone Mick has brought in has the right mentality,” said Hunt. “Tyrone Mings is still only very young, but you don’t grab the attention he has if you’re not a good player. Darren Ambrose, I’m sure, is remembered for scoring some great goals, Jay Tabb was promoted with me at Reading.

“You could go right through the squad. There are very talented players here and a great atmosphere. It means we have a tightknit group and a family feel to the club.”

Teaming up with older brother Stephen, 33, is an added bonus.

“The gaffer wanted me and I spoke to Stephen before I signed, so it’s not just a coincidence our career paths have crossed again.

“It’s great when we’re together. He’s quieter than me and I give him stick for it, but he loves it really.”