Colchester’s George Moncur is playing on God’s side now 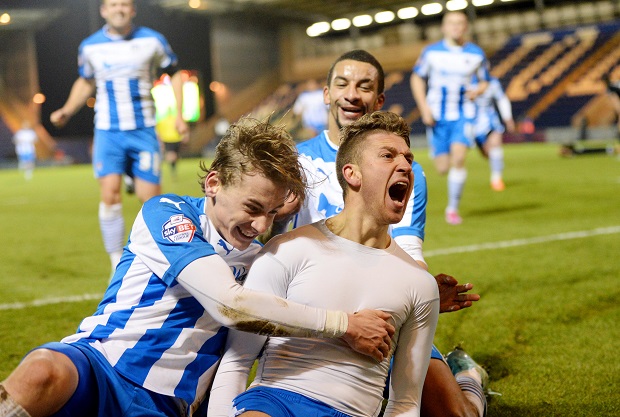 MOST players have career defining moments, but George Moncur’s wasn’t a last-minute goal or a bigmoney move – it came at church 18 months ago.

A chance meeting at All Saints in Woodford Wells turned the son of former West Ham midfielder John, picured below, into a fullyfledged son of God – and he hasn’t looked back.

“I was always a Christian since a young age,” said the Colchester midfielder. “And one day I was down at church and a woman came up to me and asked me loads of stuff. I’d never even met her before.

“She started to get things about my future and about me that only God would know – personal stuff. She isn’t a psychic. She didn’t have any balls or cards out. She was simply praying for me with her hands on my shoulder and I just thought ‘Wow, this is amazing.’

“There’s no way she could have made that up, and that was the turning point. Each day I’ve been growing closer and closer to God.

“It’s funny how it came about because my dad had seen her before I did, and he never mentioned it before.”

The full story behind Moncur’s beliefs stems back to the end of his dad’s career. Moncur senior had a fearsome reputation during his playing days – renowned for his toughtackling with the Hammers and unruly lifestyle off the pitch.

But in order to curb his short fuse, he eventually turned to former Leyton Orient winger-cum-vicar Alan Comfort, who offered a way out.

“My dad’s a massive believer in God as well, he got with God towards the end of his career,” added George. “He’s a big influence on me and my career.

“Being a Christian, you don’t always have to go to church every Sunday to be with God. You can do it in other ways.

“When I’m not on the field, if I can go, I will. God is a massive part of our lives, but so is football.”

Earlier this week Gavin Peacock – the former Chelsea captain who swapped the pundit’s chair to become a Pastor in Canada in 2008 – raised eyebrows after posting a series of controversial religious views towards marriage on Twitter.

Perhaps they’re not helping Moncur junior’s quest to bring more footballers onto the righteous path and the 21-year-old accepts he cannot convince everyone.

“You get people that think ‘what is that about, it’s a load of old rubbish’ but it’s what’s for you really, and I’ll try as much as I can to get people to join me,” continued Moncur.

“Everyone has a choice. People I speak to tend to just say ‘leave it out’. All I can do is try and get more people with me.”

Moncur has been slowly winning over the Colchester fans with his performances since joining permanently from West Ham in November.

The U’s may find themselves in the League One drop zone but the former England U18 international claims it’s the perfect place to learn his trade.

“To sign full-time means I’ll now be playing week-in, week out, which is really important,” said Moncur, who initially joined the Essex club on loan in August.

“I’ve been here since preseason, so I’m more than happy to have signed and the main thing is to keep playing. Hopefully I can keep showing what I can do on the field.

“A little part of me is a bit sad to have left West Ham because my dad played there as well, but it doesn’t matter really, I’m happy where I am now.

“God put me here for a reason, it’s all part of God’s plan.”