Posted on October 2, 2014 by admin in Featured, Skybet Championship | 0 Comments 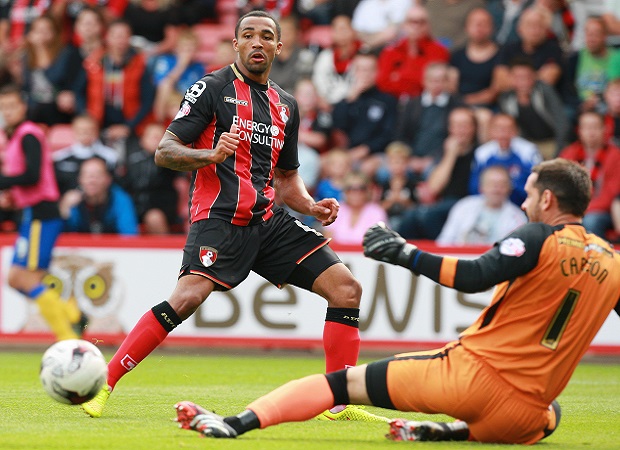 CALLUM WILSON has wasted little time in finding his feet at Bournemouth and has set his sights on firing them into the Premier League for the first time in their history.

The 22-year-old joined the Cherries in a £3m deal from Coventry in July as a replacement for last season’s top-scorer Lewis Grabban, who moved to Norwich.

Wilson made an instant name for himself, scoring twice on his debut against Huddersfield and denied a hat-trick only when Terriers keeper Alex Smithies saved his penalty.

Striker Wilson scored 22 goals last season at Coventry, 15 of those coming when paired with Leon Clarke before the latter departed for Wolves in January.

A fresh partnership at Dean Court alongside Yann Kermorgant has shown promising signs, and Wilson believes the competition in attack can propel Bournemouth up the league.

“It’s always good to start off the season scoring goals and to score twice on my debut and have the opportunity to get a hat-trick was something I’d dreamt of,” Wilson said.

“After scoring so many goals last season I wanted to carry on doing that and I feel like I’ve hit the ground running.

“You always have to believe in yourself and if I didn’t think I was capable of playing and doing well at this level I wouldn’t have taken the step up.

“I’ve enjoyed playing with Yann and our partnership so far has been good. He’s got a physical presence which draws defenders to him and creates a bit more space for me.

“But there are a lot of good strikers at the club and we are all fighting for places and everybody knows that if you’re not performing well then someone will take your spot.

“Every footballer wants to play in the top-flight and has ambitions to get there and that’s one of the reasons I came to Bournemouth. That’s the direction they want to take the club and it matches my ambitions, so I thought it was a good fit.

“These are really exciting times at the club and if we can turn the draws we’ve had in recent weeks into wins then we shouldn’t be too far off come the end of the season.”

Coventry-born Wilson came through the youth ranks at his home-town club, going on to make over 50 appearances for the first team.

Given his close ties to the Sky Blues, Wilson admits he had to think hard before moving but accepted he had reached an age where he needed a new challenge.

“It was a tough decision on a personal note to leave Coventry,” Wilson added.

“I grew up around there with a lot of the lads who are now playing in the first team.

“But there comes a point when you have to think about progressing your career and it was time to do that.

“I felt I was ready for the Championship after having a good season in League One. I wanted a bit more of a test so I made the step up.

“I haven’t noticed too much of a difference to be honest.”