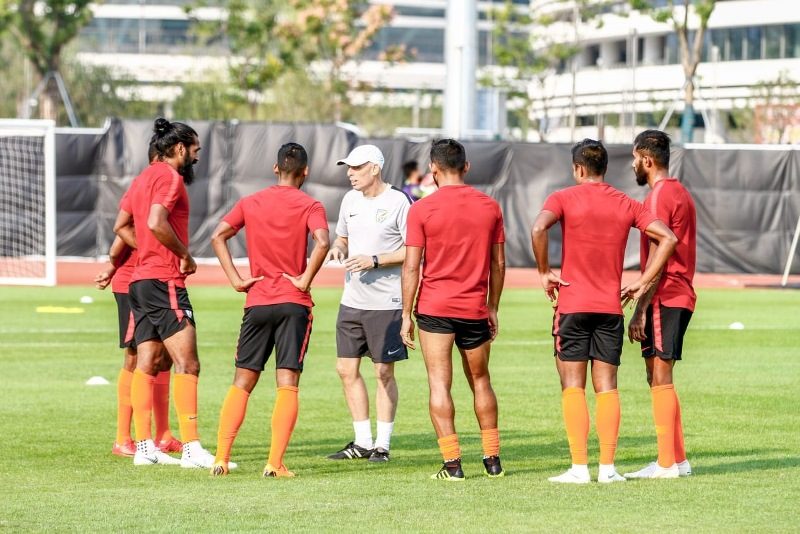 STEPHEN Constantine’s managerial career has taken him around the world, but he would still love the chance to show what he can do on home turf one day.

The 56-year-old English coach is currently in in second spell as manager of the India national team. He first took the reins from 2002 to 2005 and then returned for a second stint in 2015.

But this football nomad hasn’t just been an international manager with India. He has also led Nepal, Malawi, Sudan and Rwanda.

London-born of Greek-Cypriot descent, Constantine has also been a club manager in Cyprus, first-team coach at Millwall and worked in the academy at Bournemouth. Oh, and he played football in Cyprus and the United States.

“I’ve been quite fortunate to have gone to some of the places I have in the world. I’ve also been working for FIFA for 19 years as a coach educator.

“My career has taken me all over the place and I’ve learned a great deal. I bring quite a bit to the table in terms of worldwide experience.”

Right now, Constantine is fully focused on his job with India and the little matter of the Asian Cup in the United Arab Emirates in January.

India won four, drew one and lost one of their six Group A games in qualification to reach the finals, further signs of their rapid improvement under Constantine that has seen them surge from 173rd to 97th in the FIFA world rankings.

“I really think we have half a chance to qualify out of our group,” he said as they prepare to face the hosts, Thailand and Bahrain.

“We are a difficult team to beat when we play well, but it depends if we can put three games together in ten days.”

For his own part, Constantine is unsure where his football journey will take him next. His contract with India finishes at the end of January and how they perform in the Asian Cup could go a long way to deciding what happens next.

And having seen the ups and down of football in his lengthy career, Constantine is keeping all his options open – including his long-held wish to manage in the Football League.

“I was born and brought up in England and had trials with Chelsea and Millwall as a kid,” said the Arsenal fan. “When I can, I come back home.

“As a manager, I haven’t had the opportunity to manage in England for a, b and c reasons, but I feel I have a good deal to offer the Football League with my experience and background.

“I miss club football and the day-to-day involvement. If England is an option, brilliant. I really would like to manage in England one of these days and am sure I would do well wherever I went.

“Sometimes people say to me ‘you should feel upset you haven’t had a chance in England’, but I’m okay with it.

“My approach to football is holistic, and I know the Football League well. It’s not like I can’t speak the language or don’t know the clubs. I keep tabs on things.” What Constantine would like is for someone to look outside the box, like he has been prepared to do in his football odyssey.

“In some cases chairmen know certain managers and it’s almost ‘better the devil you know’,” he explained. “I think that’s why we sometimes see managers on the merry-go-round, don’t do well at two, three or four clubs and still get positions.

“We are a bit insular in England and people may not know or understand what I’ve done, but all I ask is that I’m given an opportunity at some point.

“Perhaps there is someone out there who thinks ‘maybe this guy has something to offer’. If that’s the case, I will show everyone what I’m capable of.

“What I have really taken from my experiences is to never say you can’t, you will find a way.”