Posted on November 17, 2018 by admin in FA Cup with Budwieser, Featured, Features | 0 Comments 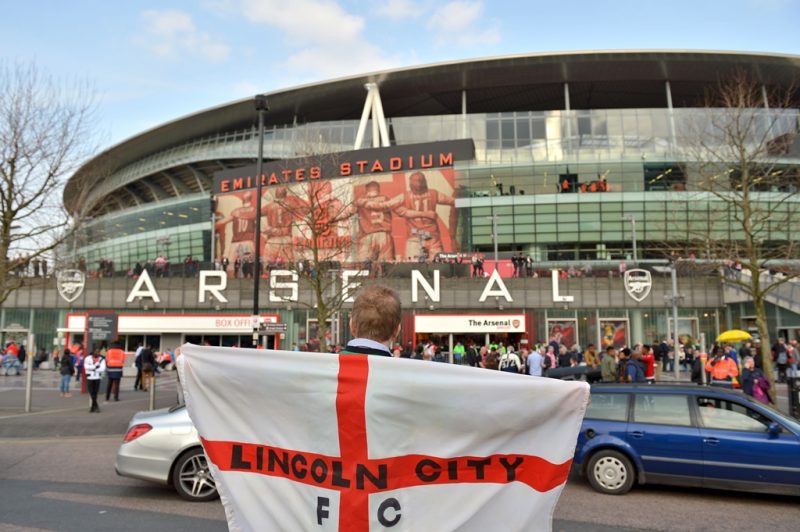 IF ANYONE doubts what the FA Cup can do for a club, then taking a trip to Lincoln City should satisfy them.

Back in 2016-17, the then-National League club memorably weaved their way through the rounds all the way to the quarter-finals before going out to Arsenal at the Emirates.

A couple of seasons on and the Imps, who hosted Northampton in the first round yesterday, are leading the way in League Two – and the legacy of that Cup run is more apparent than ever.

Why? Because in midweek Lincoln revealed their start-of-the-art new £1.3m elite performance centre, funded by those FA Cup deeds.

As well as the 400m² main building, the training ground features two specialist TV towers that will enable the club’s technical staff to film and analyse training and matches in real-time.

Also included is an innovative sprinkler system, boasting 55 water sprinklers that can be activated remotely from anywhere in the world, and an additional new groundcare building to protect the ground staff’s equipment.

It’s heady stuff for a club in the doldrums not too long ago and little wonder the key protagonists are grateful for what that FA Cup prize money has done for them.

Assistant manager Nicky Cowley, whose brother Danny bosses the side, told The FLP: “The new facilties are fantastic and we are really delighted. It brings back lots of memories of the cup run to the quarter-finals and that money has made a huge difference to the club. It wouldn’t have been possible without it.”

Left-back Sam Habergham added: “We have been training on the pitches for quite a while now and we have seen the buildings develop over the last few months – it all looks amazing.

“It’s going to be massive for the club for many years to come. It’s going to be a really good place to come and work, and other players may want to sign for us – it will push them towards Lincoln City.” 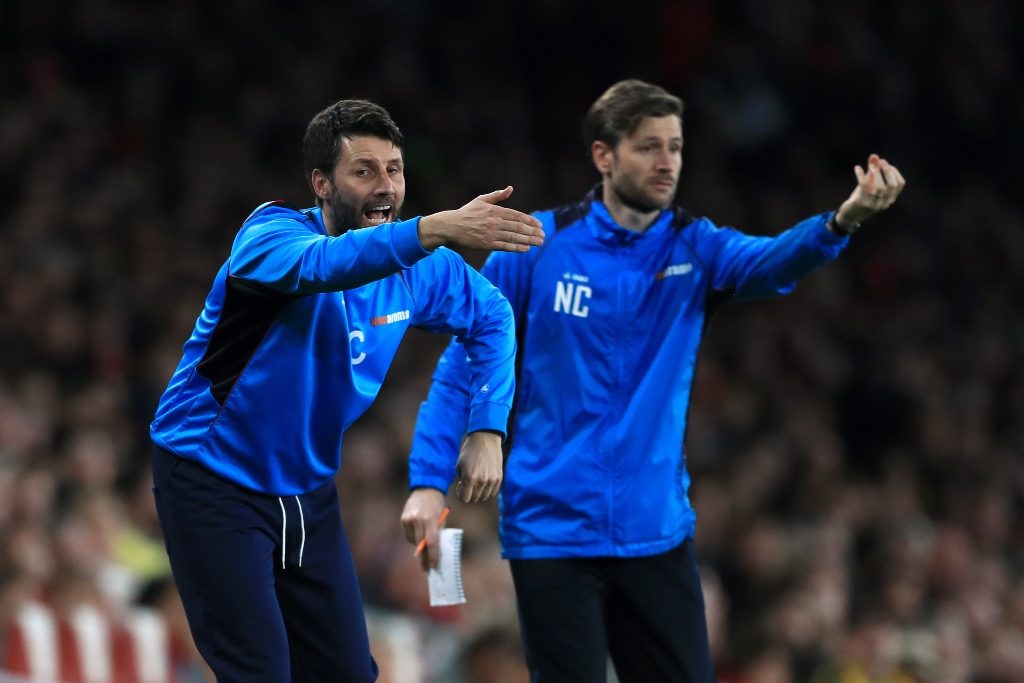 Masterminds: The Cowley brothers issue tactics at the Emirates Stadium during the Imps showdown with Arsenal (photo: PA Images)

Back in that 2016-17 season, it was the Cowley brothers’ first at the helm and no-one could have predicted what a campaign it would prove to be. They won the National League and reached the semi-finals of the FA Trophy – but it was the FA Cup run that really brought them to the attention of the public.

The Imps saw off Guiseley, Altrincham, Oldham, Ipswich, Brighton and Premier League outfit Burnley, the latter away in the fifth round, to become the first Non-League club to reach the quarter-finals in over a century. The memorable journey finally came to an end in a 5-0 defeat at Arsenal in the last eight.

Habergham, 26, recalled: “There are three things that stick out for me. Firstly, the Oldham game (Lincoln won 3-2 against the League One side in the second round). It was a night game at home and the first time we had such a big crowd there, more than 7,000 – the atmosphere was unbelievable.

“Everyone started believing we could do well in it and were a good side. Then there was the Burnley game – to beat a Premier League side away in the last minute was unbelievable.

“Finally, there was the Arsenal game. It was good until half-time, but the second half was very long and tiring. As an Arsenal fan at the Emirates for the first time it was a special day.

“I got Theo Walcott’s shirt afterwards – I had spent most of the game trying to chase after him! We went into their changing room afterwards and spoke to Arsene Wenger and some of their players, which was a nice touch.”

Nicky Cowley also picks out the Oldham game as a key moment for the club.

“That was the start of the momentum,” he said. “It was a foggy night at Sincil Bank and not many people expected us to win – it was National League versus League One. We came flying out of the traps and it was the night we paid tribute to the late Graham Taylor, a former Lincoln manager and legend. It was very foggy and it was really fitting towards the end of the game when every supporter took their phone out and shone a light with it. It was an amazing tribute celebrating Graham Taylor and in those circumstances we realised that night that Sincil Bank was special.” 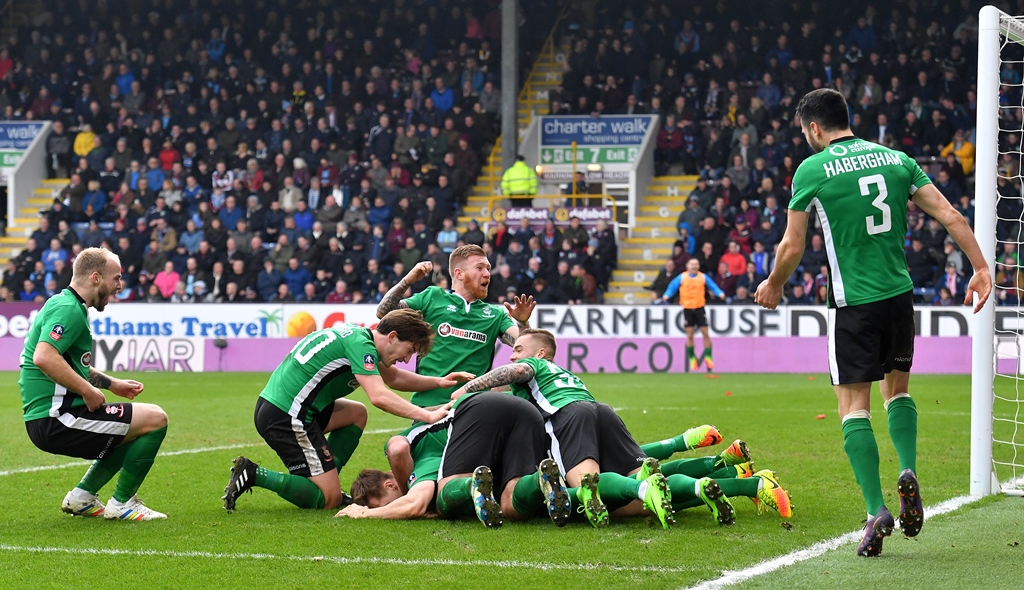 As for the progress the club have made over the last couple of years, Cowley is modest. “It’s a team effort,” he said. “People are quick to praise Danny and me, but without the contribution of the players, the board of directors and our amazing supporters none of this would be possible.

“It’s everyone in Lincoln coming together. We are packing out Sincil Bank every home game and there’s a common goal – to take the club as far as we can.”

Will that be League One next term? Cowley is circumspect.

“We aren’t getting ahead of ourselves,” he said. “It’s a really difficult division and there are big clubs with big budgets.

“Forty-six games is a huge test and you play Saturday and Tuesday – you have to be relentless. We aren’t taking anything for granted. We are doing well, but aren’t halfway through yet. As a club we need to work hard, stay humble and keep taking one game at a time.”

Habergham is on message with that line of thinking.

“It’s been a really good start, but it’s only a start,” he added. “It’s nice to be top of the league and take a little break from it for the Cup. When we come back to it, we want to stay there.”

Whatever happens this season in league and cup, the Imps can always look back with fondness on an unforgettable FA Cup run and the legacy it’s created.

With the FA doubling the prize money on offer this term, others will be eager to follow in their footsteps.