Home / Featured / We’ve got to keep things clean at the back, says Swindon Town’s McGlashan

We’ve got to keep things clean at the back, says Swindon Town’s McGlashan 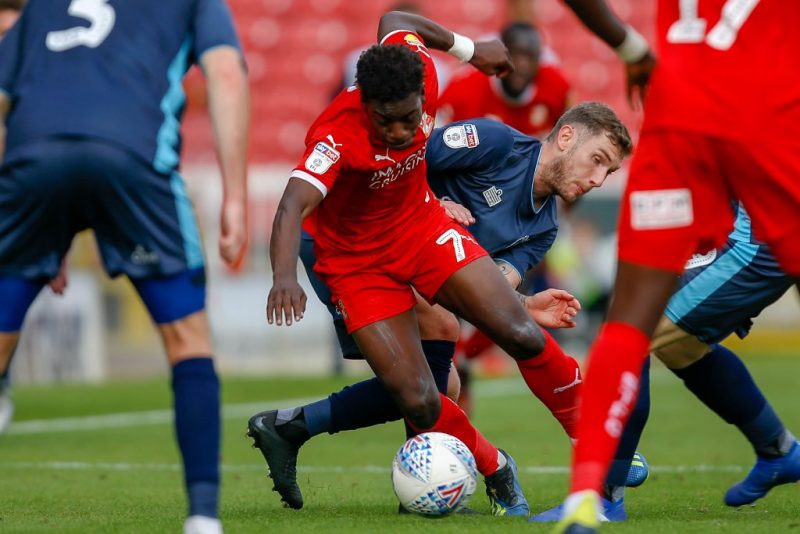 Winger Jermaine McGlashan is prepared to dig in defensively if it helps Swindon bag precious clean sheets – and promotion out of the EFL basement.

The 30-year-old has made almost 300 appearances in the EFL, accumulated across eight years, and  has bags of experience after stints with Aldershot, Cheltenham, Gillingham and Southend.

This summer, McGlashan linked up with his former Southend boss Phil Brown at the County Ground. He has yet to celebrate promotion as a player, and therefore has ambitions that match a club that are something of a sleeping giant.

“You know it’s a club that shouldn’t be at this level,” he said. “You come in and there is that pressure to win games, there’s a demand on the club to be at a certain level.

“You do feel it and it’s one of those where I think the gaffer has recruited players that can handle this level and handle that pressure.

“There’s no hiding from the fact that we want to be challenging up in the play-offs and we’ve got the personnel to do it.”

“There’s been a bit turnover in terms of players going out and now we’ve been getting a couple of clean sheets – he’s a clean sheet manager, a 1-0 manager,” he said.

“He’s starting to make his mark on the team in terms of wanting to win 1-0.

“The first few games, we got some good results – Macclesfield in the first game of the season [a 3-2 win] – but even then, as upbeat as he was, he doesn’t want to be having a heart attack. He’d take the 1-0 all day!

After a harum-scarum start to the league season at Swindon, with nine goals scored and ten conceded in their first four games, things have settled down somewhat as Brown continues to bed in, having stepped into the County Ground hotseat in March.

They conceded only four in their next six League Two games, picking up nine points in the process, and are steadily making their way up the table.

And whilst McGlashan – a wideman by trade – was signed for his creativity at one end of the pitch, there is certainly no shirking of his responsibilities at the other end under Brown

“As an attacker, it’s slightly different but his mentality is clean sheets throughout,” he said. “In terms of pressing from the front, what he wants from his attackers is that high press.

“He’s obviously identified that in me. I’ve done that for him at Southend. It’s about getting the ingredients for playing how he wants to play, which is defending from the front because it does take 11 to get the clean sheet.

“You can do everything in the back line but sometimes it’s about two banks of four. As an attacker, you’re still so important to helping to get the clean sheet.”