To order 1966 AND ALL THAT! THE 50th Anniversary book at our special price of just £5 (RRP £12.99) including FREE Postage & Packing, please complete your order via the payment button below. Please note, you do not need a Paypal account to buy these books via the order form below.

Reports on EVERY match from the tournament plus special insights into Alf Ramsey’s dilemma over Jimmy Greaves or Geoff Hurst; the systematic butchering of Pele, the world’s greatest player; the romance of North Korea beating the mighty Italians; and the full drama of the final and Hurst’s hat-trick.

*Applies to the UK only, for overseas enquiries email – subscriptions@greenwayspublishing.com

Celebrating the 50th anniversary of England’s 1966 World Cup win, BOBBY reveals the story of triumph and tragedy behind Britain’s greatest football hero, Bobby Moore, which has been released on Blu-ray, DVD and Digital Download. With spectacular archive footage including film from the ’66 World Cup that’s never been seen, the golden era of English football is vividly brought to the big screen like never before. 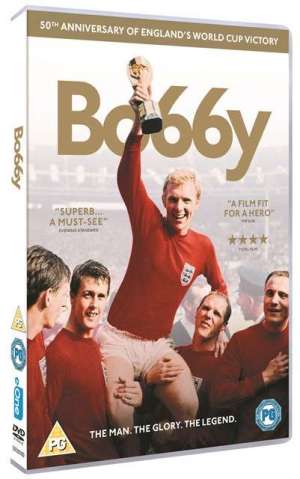 To celebrate the film’s release, we have been given an exclusive clip from the film, showcases how highly regarded Bobby Moore was as Captain of England. Bobby’s ex-wife Tina Moore discusses how Bobby knew he carried a responsibility being the Captain of England, with Ray Davies (The Kinks) and Sir Geoff Hurst also reflecting on his time as Captain. Harry Redknapp also shares a fond, comical memory of Bobby giving him that “look”, when he was sent off during a game at Leeds.

Bo66y is available on Blu-Ray, DVD and Digital download here